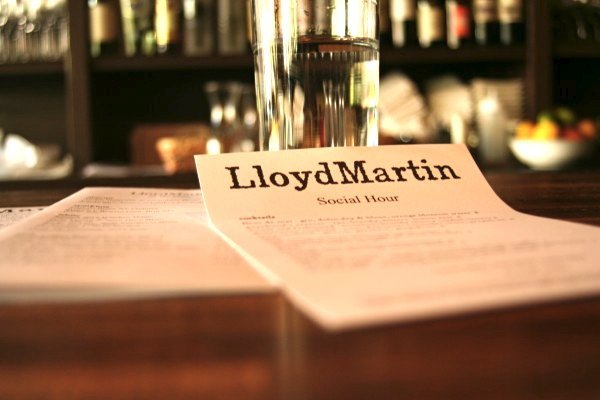 There are few cases when not appearing to try to hard actually serves a purpose.  Rock n’ Roll comes to mind along with modern art and smoking cigarettes – all of which seem tied together in one blob of angst.  On a lighter note, I’m happy to add the rustic (but not superflously as many new restaurants make the mistake of – “These are authentic spider webs from 1925.”) interior of Lloyd Martin.  The worn wood-laid bar says it all with just enough wear while absent love lost carvings from jaded lovers.

Better, LM really starts to care when it comes to everything post decorum, and this is no more evident than on the restaurant’s social hour menu.  Instead of going the traditional route of half off apps and set drinks, chef / owner Sam Crannell decided for one hour a day, he would feature daily small plates inspired by what ingredients were walking through the door via purveyor, forager, or his own hands.  To accent such gripping flavors, LM’s bartenders are given the freedom (and without an abundance of talent, such scope would not be allowed) to make completely original cocktails per a person’s order and palette preference.

Must Have Eats:  As already expressed, the plate options come and go on a whim, so I’m left to describe a few bites that I was lucky enough to stick my fork into.  My meal began with a poached ravioli that hosted a quail egg yoke, and was topped with shaved Parmesan and slices of black truffle.  Next, sturdy, light chunks of albacore were surrounded by olive oil and mounted by diabolical green olives.  The final kick came with some maple drenched baked beans as well that smothered a generous, crispy slice of pork belly.  All this is prepped and cooked in a kitchen no bigger than a bathtub, and only costs $5 a plate.

Must Have Drinks:  To be blunt, order what you must have.  If the barkeep can provide, they will do it for $8.  Tyler, the bartop’s tenant for my afternoon visit, happened to bring in even a few of his own concoctions that he was amply adding into the shaker for guest’s enjoyment.  And in a burgeoning trend that I enjoy, the bottle count behind the bar was minimal but of quality, making one’s decision more about the color of alcohol you drink rather than the brand.  If adventure isn’t the cards on a particular day, fret not because a slew of micro bottled beers are available for $3 and wine pours for $6.