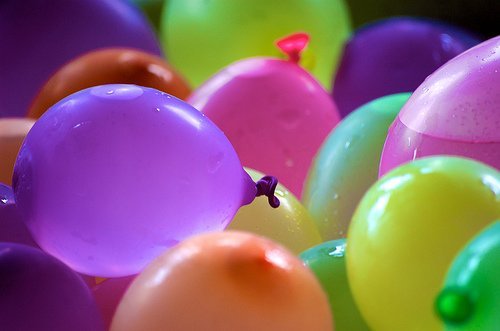 This Saturday a group called Seattle Party Camp is going to host the world’s largest water balloon fight. It’ll take place at Seattle Center and they are expecting 12,000 “campers.” There will be no mercy.

300,000 pre-filled water balloons will be available to the “campers” for the fight. Summer camp usually lasts 7 days, but for all the city folks in Seattle, Party Camp is cramming 7 days of camp into 7 hours. “Summer Camp is a time when you can really come together with a group of friends that you might of just met, and all the sudden you’re best friends for a week,” said Neil Bergquist, founder of Seattle Party Camp. Bergquist was also the man behind last winter’s Snow Day, the World’s Largest Snowball Fight. Proceeds from that winter event went to the Boys and Girls Club of King County. Proceeds from this Saturday’s water balloon fight will go towards sending kids from Seattle Children’s Hospital to Camp Korey in Carnation, Wa. The camp is designed to offer children with disabilities a summer camp experience.

By day. Bergquist is co-founder of Surf Incubator, a Seattle technology start-ups work space for digital entrepreneurs. It was at his office for creative minds where he first thought of setting a world record that would bring together community and raise money for nonprofits. He said he learned a lot from Snow Day. There were a lot of things that went well, and a lot of things that could have gone bad. The Snow Day team transported 162,000 lbs. of snow from the mountain passes into Seattle Center and 5,834 showed up for the epic snowball fight. He said it only made sense to take that learning experience and keep going. “We know how to do it better now, so we’re going for it,” said Bergquist.

A full mini-documentary about Neil Bergquist and his world record-breaking ideas is coming this summer to Seattleite. Subscribe to  Seattleite YouTube Channel for updates and enter to win free tickets to Seattle Party Camp!