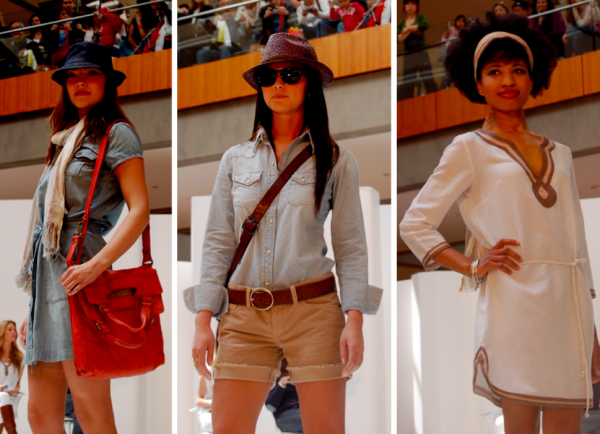 It’s an unlucky start for the Lucky Brand event in Bellevue when the stage collapses. Don’t worry, though — the show hasn’t started yet, so no models are injured. A production crew rushes to prop the walls back up, and the misfortune is soon forgotten when everyone’s favorite style guru steps on stage.

Tim Gunn is clad in an out-of-character casual look — a far cry from his typical suit. “I’m wearing Lucky Brand head to ankle,” he says. He does, however, manage to class up the ensemble with a plaid button-up and tie underneath a navy “professorial” sweater with patches on the elbows — and of course, jeans.

You may know Gunn as the host of Project Runway, a best-selling author, or even a comic book star. However, he’s also the Chief Creative Officer for Liz Claiborne, which owns Lucky Brand Jeans. Hence, his current gig as a runway host.

Hundreds have packed into Bellevue Square’s Center Court for a chance to see — and hear from — the beloved style expert. Shoppers who spend at least a hundred dollars at the Lucky Jean Shop will be lucky enough to meet Gunn and have their photograph taken with him.

Despite his vested interest, Gunn insists he’s not here to get you to buy more stuff. Instead, he encourages people to “take ownership of the items in your closet and make them your own.”

During a runway show that displays about 20 different summer looks, Gunn demonstrates how to make the clothes you have multi-task.

After telling one male model to pull out his tucked shirt, he quips, “see — instant sloppy.” The women’s Havana Tunic Dress makes a repeat runway appearance highlighting two different ways to wear it — first as a beach look with a hair scarf and sky-high wedges, then over white jeans with sandals for a day out shopping.

Gunn is against anything that single-tasks — “unless it’s your wedding dress” — which is why he has hang-ups with certain trends that could be considered limiting.

Distressed denim, for instance, makes him cringe. “If you’re wearing them, you should be climbing a tree or on a baseball field,” he deadpans.

There could be an exception to the rule: if ripped-up jeans happen to flatter your figure. Gunn isn’t sure this person exists, but if they do, more power to them. “It’s all about silhouette, proportion and fit,” Gunn says. This is why he candidly explains that shorter girls shouldn’t wear cropped pants and leggings only work on some shapes.

Gunn isn’t afraid of telling it like it is — and that goes for fashion as well as gossip. “I’m probably breaching my confidentiality agreement with the network,” he says as he dishes dirt on the most recent season of Project Runway. There was some tension behind the scenes after Gunn called Heidi, Nina and Michael “crack-smoking judges.” Though he doesn’t agree with the outcome of Season 8, he admits, “everything happens for a reason.”

Honesty is clearly Gunn’s policy — in life and style. He encourages others to embrace trends while being truthful about what works for them. “If you need to ask someone if you can pull it off, you probably can’t,” Gunn says.

His advice may be harsh at times, but it’s also easily accepted. He’s blunt, be he’s a charmer. He has the ability to make anyone feel like they can be stylish. When it comes down to it, Tim Gunn just wants you to “make it work.”