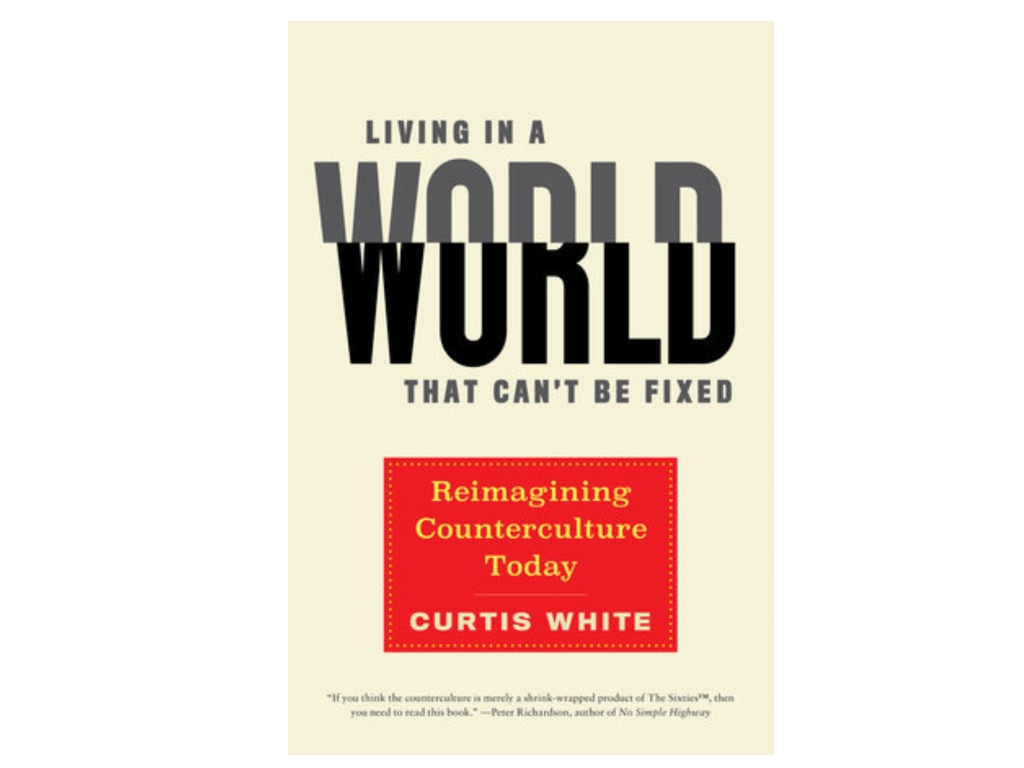 “Let us become who we really are”, is perhaps one of my favorite teachings of Buddhism. Author Curtis White echoes the same sentiment in his new book Living in a World that Can’t Be Fixed: Reimagining Counterculture Today.

We are born to pre-conceived notions and grow up under the strains of societal expectations and demands. Are we always meant to fight against socio-economic models? White tells us to stop fighting it, and start living outside of it. If this sounds interesting to you, he’ll be at Third Place Books (Ravenna) on November 12th for a book signing, and you can hear him out in person.

Known for his experimental writing in the last half-century, White’s deep dives into the cultural consciousness of our country led him to international acclaim with the release of the best-selling The Middle Mind, a critique of our relationship between technology and culture, as well as The Science Delusion, and We, Robots. Living in a World that Can’t Be Fixed continues that tradition. It’s a fascinating read about a fresh view on how to grapple with the issues we encounter every day.

We recently spoke to White about the various crises plaguing modern-day society and what we, as individuals can do about them.

Seattleite: Please tell me a little bit about your writing and growing up days?

Curtis White: I grew up in the Bay Area post-war suburb of San Lorenzo, a stifling little place then as well as now. The two things that I had going for me were, first, the happy fact that the public school system in California at that time was excellent. Even though my origins were working class, I could still get the tools I needed to get into a university and compete on more or less equal terms with those who had elite preparation for college.

I also had the advantage, unbelievable though it seems now, of bountiful public support for college tuition. So, I didn’t feel constrained to study something that would allow me to repay an enormous loan. The second thing that I had going for me was that beginning in 1967 or so, the San Francisco counterculture exploded, happily seducing me through music and psychedelia to escape the limiting options that the suburbs offered young me.

Seattleite: How did you get into writing?

CW: I thought I would be some sort of leftist lawyer during my first year in college, you know, work for the ACLU or something. But I had never before been exposed to the Western literary canon, especially Henry James and Wallace Stevens, and I fell in love with Les Mots, as Sartre put it: The Words! Writing was also a way for me to join the counterculture and the anti-war movement. I wasn’t a musician, so a rock band was not an option, but I could make language sing. I’ve never stopped being a counterculturalist, even though I’m well beyond my hippy phase.

Seattleite: What inspired you to pen down Living in a World that Can’t Be Fixed?

CW: Simply put, I think that countercultures are still our best hope for social change. The media has been telling us that the ‘60s were a failure for half a century now, but how, then, is it that so many things that the ‘60s counterculture worked for are still powerfully with us: ecological awareness, alternative ideas about sex and gender, alternative ideas about race, alternative food, alternative music (the current Indy music scene would have been very welcome then), alternative ways of relating to national political culture (the birth of the politics of suspicion), and openness to new religions (especially Buddhism). Seattleite: According to you, what are the biggest issues we face as a society in today?

CW: The biggest issue facing us is what it has been for the last two hundred and fifty years, going back to William Blake and the Romantics: we are born into social and cultural systems that reduce us to unknowing participants in our own destruction. The people of California are experiencing the consequences of that now in bold relief, a dramatic chiaroscuro of a burning tree against the black night sky.

California car culture, commuting, suburbanization, massive highway systems, all watched over by machines of loving grace” (Google et. al.), all that has created the following: the world is on fire where it is not underwater. If Californians pick up the pieces and try to restore their perverse dream, the state and so many other places in the world will become uninhabitable. It may already be so in large parts of Northern California. The question is, as Tolstoy put it, “what is to be done?” Hand the mess over to authoritarians like Donald Trump? Will the Democratic Party save us? Perhaps, at last, a real socialist state? Or some hybrid invention yoking socialism to the counterculture, a sort of “socialist survivalism”?

Seattleite: This is not your typical how-to book. Who is your reader and in what way are they empowered?

CW: My reader is anyone capable of thought. That, I’m afraid, excludes much of the population for the moment. But as the old world fades and its assumptions reveal themselves as self-defeating, more and more people will have no choice except to think independently.

I call for the politics of non-participation, the politics of refusal, or, as Timothy Leary used to say, the politics of “dropping out.” My readers will be empowered when they see that they really don’t have any other choice: whether affluent data drones or factory workers with no job and no expectations, the fundamental requirement is living differently. The long history of counterculture, going back into the 18th century, can provide us with tools for thinking about how to live differently.

Seattleite: What would your advice be to stir social change at an individual level?

CW: Buddhism has a concept of the Wheel of Life. On that wheel are different realms one of which is the Realm of the Hungry Ghosts that sits next to the Realm of Hell. We have lived for too long as Hungry Ghosts—never satisfied consumers of the world itself—and we can now see that the nearing consequence for living as Hungry Ghosts is life in Hell. I think that people are increasingly aware of that fact.

The only remaining question is how we will move beyond that awareness into reimagined forms of social life. The wealthy, the 1%, say, “I don’t mind that you are in hell, so long as I survive, and I intend to. There are too many of you anyway. We have robots and don’t need your pitiful contributions. So go ahead and die.” But the Wheel of Life also has a form of hopefulness, the Realm of the Human. Buddhism does not assume that humans are innately monstrous, although the way we live is monstrous. It assumes that every human potentially shares in the wisdom of the Buddha. So, my call is, “Let us become who we really are.”