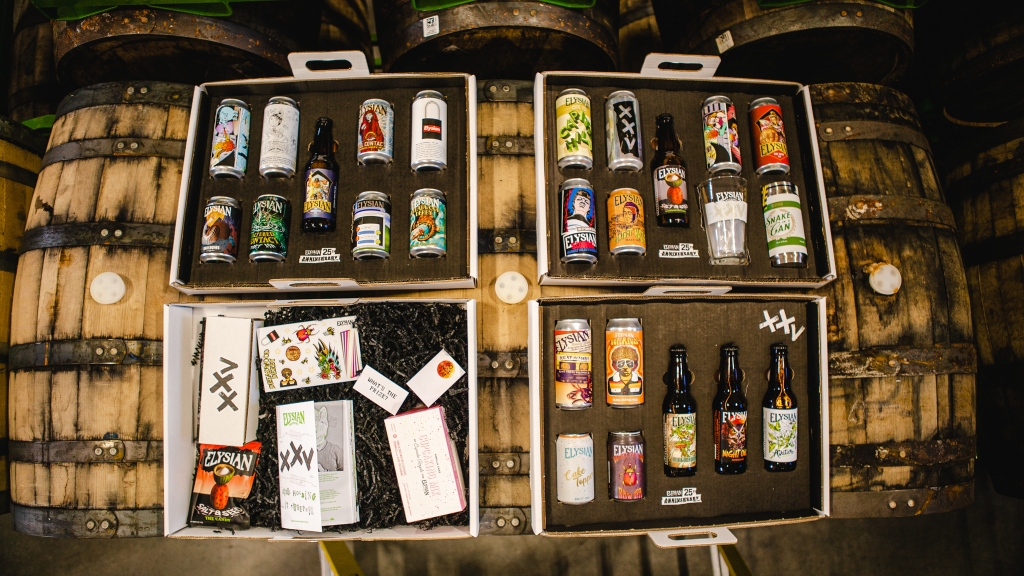 Seattle’s Elysian Brewing has been brewing delicious craft beer for 25 years. To celebrate this milestone anniversary, Elysian brewers created a fun, funky, one-of-a-kind anniversary box filled with goodies and surprises, and of course, lots of beers!

The limited-edition anniversary box is available for purchase by residents in Washington for $96.00. Beer lovers located outside of Washington can still join in on the celebration by checking out the 25th anniversary merchandise collection that ships nationwide.

In addition to receiving this limited-edition box, which included 23 beers (!), I attended a virtual tasting event hosted by founders Joe Bisacca and Dave Buhler. This event was accompanied by Elysian tasting glasses and plenty of treats. We got to taste crowd favorites like Contact Haze and Space Dust, as well as Salt & Seed (a delightfully refreshing Watermelon Gose), The Wise, Prometheus, and Snailbones (full of peach and guava flavors). The tasting was both fun and informative, and it was great to be able to ask the brewers questions, such as whether they’ll be releasing a sour anytime soon (never say never!).

I could tell just by talking with the Elysian founders that so much heart and soul has gone into their beers. Elysian is known for experimenting with unique flavor profiles and reimagining what craft beers can be. To date, Elysian has brewed thousands of beers and is always seeking inspiration for its next product, imaginative packaging, and label design (their label designs are always so colorful and fun).

Elysian has been an integral part of the Seattle community. They have opened brewpubs, restaurants, and a taproom. They’ve had partnerships with KEXP, The Vera Project, Seattle PRIDE, Fisher House, and Fantagraphics. They even host annual events like the Great Pumpkin Beer Festival, which for many locals is the unofficial kickoff to fall.

I hope I’ve inspired you to get to one Elysian’s Seattle locations and grab a beer! Cheers!