On June 25th at 7:30pm there are some rock and roll stars coming to the Moore Theater – and they plan to tear the roof off the mutha and get you bitches dancing. Their names are The David Grisman Sextet and Michael Shrieve’s Spellbinder. 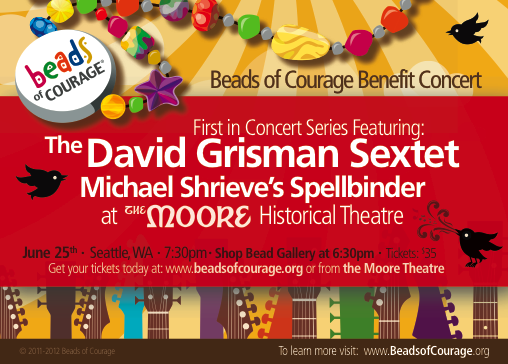 Michael Shrieve is the original drummer for Santana- — the man played Woodstock, which has earned him ‘rock n’ roll demigod’ status. David Grisman mixes bluegrass with Django Reinhardt-influenced jazz so well his old BFF, Jerry Garcia of the Grateful Dead, would be proud.

The tickets are only 35 bones and the extra cool thing is that this is a benefit concert for the Beads of Courage — an organization dedicated to providing innovative, arts-in-medicine programs for children coping with cancer and other serious illness. A significant portion of the concert proceeds will support the current Beads of Courage Program at Seattle Children’s Hospital.

I’m a little nervous because I want to serve something that is redolent of the bounty of Seattle, but nothing overly-trite like smoked salmon on Starbucks-spackled coffee crackers. I’m in the process of recipe development, which means I stand around in my underwear (because my kitchen is so damn hot) and eat little wisps of this and dabs of that as I try to come up with perfect superstar snacks.

It’s trickier than you think. I mean, I don’t want to bloat them, dose them or comatose them, so I need something zippy, fresh and rock n’ roll Northwest. The latest canapé to make the cut is called Uni Chantilly Cream in Squid Ink Cornets. Cornets are miniature cones like you would put ice cream in, only instead of filling them with ice cream, fancy people who hold things with their pinkies out fill them with swirly decadent foamy stuff and sometimes scads of caviar.

Normally they are dun-colored, but I wanted to make mine black, because, you know, rock and roll stars like black and skulls and bones and stuff. Squid ink dyes food black and it tastes like the salty sea, so it was only natural I should use it to color the cornets.

The Uni Chantilly cream is made from the gonads of sea urchins — because if you’ve ever seen Axl Rose, you know how rockers feel about balls. While that may sound disgusting to you, uni is actually a delicacy in many cultures, as you can attest if you’ve ever sliced open a sea urchin and tasted the sweet orange substance inside.

I whipped the urchin uni into an airy cream the same way David Grisman is going to whip the crowd into a frenzied froth, and then piped it inside the cornets while totally rocking out with my pinkie out (to paraphrase a famous expression).

I topped the pretty little confections with wasabi-tinted tobiko — basically the oceanic version of Pop Rocks used to create certain types of sushi. The wasabi is meant to give the musicians spicy incentive to turn up the heat on stage. A lot more madness went into the creation of this recipe, including a border-smuggling story that fits right in with the rock n’ roll theme.

You should buy tickets to this event, which is sure to whet your appetite as well as your panties. Stop me and say hi and I may even give you a bite of my uni.