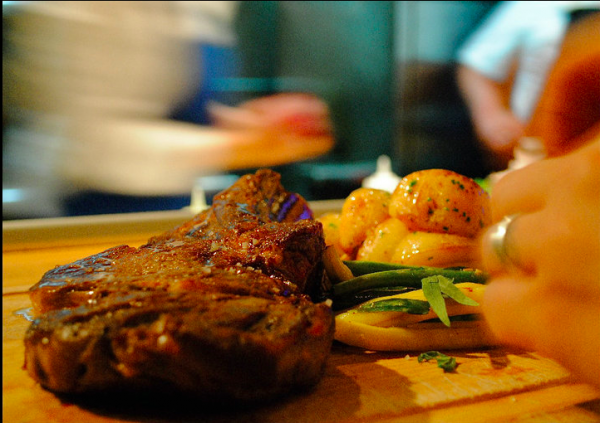 Sensual, island-sourced cuisine is just a ferry trip away.

There is a long weekend ahead and you are tired of the same old Independence Day festivities. How much red, white and blue jello salad can one person eat before they turn into a gelatinous hot mess capable of nothing greater than blowing up the neighbor’s mailbox with Roman Candles clandestinely purchased from a nearby fireworks stand? 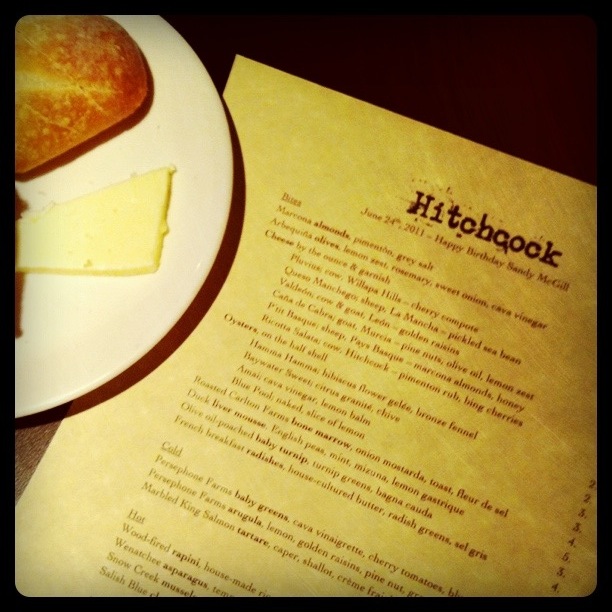 Instead of slacking around Gas Works Park like a sparkler-wielding hoodrat in a polyvinyl Wonder Woman suit you pilfered from the Goodwill costume rejects pile in an attempt to attract an Ed Hardy-clad guido back to your “yard” with the promise of a “milkshake,” why don’t you class it up a bit this year and hop a ferry to the island? Bainbridge Island to be exact, where you’ll dine at Hitchcock Restaurant.

Hitchcock has the sexy factor in spades because there is bone marrow on the menu. Have you ever licked warm bone marrow off your quivering lover’s body? It outclasses edible underwear as a bedroom prop for gastronomes any day.

Hitchcock is helmed by Chef Brendan McGill, formerly of Cremant — the greatest little restaurant to close in the Madrona neighborhood since, well, ever. McGill brings the culinary spirit of Cremant to Hitchcock but pairs it with the business sense he gained while working for the soul-crushing yet successful McConnell restaurant conglomerate.

McGill is an autodidact charcutier, and on the night I dined there with my husband and child, I noticed a spaghetti carbonara made with “lambchetta” on the menu. Lambchetta is lamb belly that has been cured and aged in the same fashion as pancetta.

It lent the dish an earthen feel and that along with the locally-farmed duck egg clung to the handcut noodles like a mini skirt on one of Sir Mix-A-Lot’s lady friends. There is always a wide selection of masterfully-shucked oysters at Hitchcock, as well.

McGill stays abreast of modern culinary trends but he does so with a measure of classic competence. Case in point: his asparagus gnocchi with English peas, pea shoots, pine nuts and carrot foam. It is a successful ménage a trois of island-produced peas with an age-old Italian dumpling spruced up with asparagus, along with the carrot foam which is a whimsical interpretation of molecular gastronomy that actually makes sense.

It was the winning dish of the night, bearing in mind that I didn’t have room for the hanger steak served with PX sherry gastrique and my favorite succulent green, mâche lettuce.

McGill is very proud of the fact that he sources so much of his menu from island-based producers. He made the point that at many restaurants in the city you will find exquisite preparations and interesting combinations, but the vast majority of the produce comes from Frank’s Quality Produce — and is, therefore, much the same. Not so at Hitchcock, where items arrive in McGill’s kitchen straight from the fisherman’s nets.

The Hitchcock adventure would be perfect for the upcoming long weekend, but is also easily possible some evening after work. We hopped a ferry around 7 p.m. and were home by 11 p.m., and that’s with several courses and enough wine that we were happy it was a 100-percent public transportation-based adventure. Of course McGill’s right-hand man Andrew Martino, who calls McGill a “brother from another mother,” did give us a quick lift back to the ferry terminal to ensure we’d catch the boat on time.

That’s just the way it is at Hitchcock — you’re in a top-destination restaurant that could rest on their recent laurels and watch hordes of tourists roll in, but instead they jump in, lend a helping hand and make you feel like their best friend by the time you’re safely ensconced on the ferry back to Seattle. Between McGill, Martino and their extremely competent server, Amanda Frye, you get the feeling that Hitchcock’s is the 21st century version of a family affair.

It just feels right supporting people pursuing a vision that is driven by supporting the region around them in such a seductively delicious way.