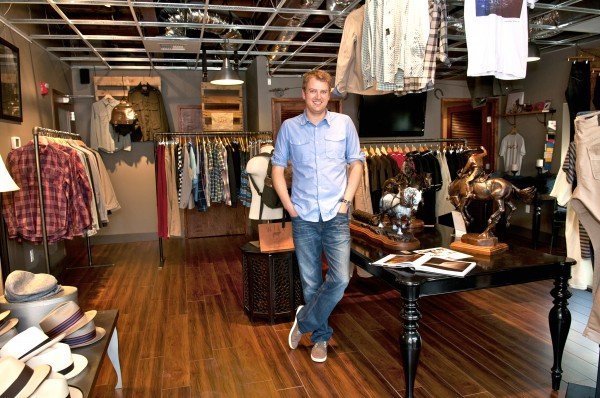 Lawrence of Asher Goods in Kirkland; Photo by Amanda Howse.

Asher Goods has classic looks for men who want to create their own casual style.

Asher Anson, a chic men’s and women’s boutique in Ballard, closed this last March. That’s far from saying that the store is done with fashion! Asher: Men’s Clothing and Goods opened in June 2011 just across the water in Kirkland, and they’re right back in the swing of things already.

Co-owners Matthew Lawrence and Jerry Morris (they’re also brothers-in-law) started Asher Anson about three years ago, but “We’re just now getting our feel going. We’re more true to who we are now,” says Lawrence, of the new Asher store.

Their Kirkland store is built on Pacific Northwest casual style, with clothing and goods to suit the Seattle-man. “We wanted to have a more rugged store, with things that weren’t just for the trendy guy. Asher Anson had more of an L.A. feel, but the Asher we have now is more stuffed with stuff, more classic and comfortable things for the everyday man,” Lawrence said. “We’ve added brands that are really easy for guys to wear.”

Fashion for men can vary from being as pristine and brand-centric as women’s clothing, or as loose and perfect as a pair of jeans from Goodwill. “We’re not so much selling guys on fashion anymore, it’s more about the brands that they can use to create their own style,” says Lawrence.

The new Asher is a style for the Eastern or Western Washington guy – forget the minimalistic L.A. feel – Seattle guys want some threads suitable for fishing, hiking, and all-around hanging out. At least when they’re out of the cubicle and enjoying the outdoors.

“We want to be a mix of nice fashions that are good quality now and will be great later. There aren’t a lot of specialty shops that are comfortable with who they are, like we are at Asher,” Lawrence said. “People can really relate to the things ‘grandpa’ wore … I like to call them ‘future finds’ – the pieces that someone down the road can find in a closet, something their grandpa wore that’s as cool then as it is now.”

PANTS: Alternatives to denim, such as twill, khaki, chinos – are all making a comeback, and brands are starting to put more time into the style and cut of their anything-but-blue jeans. Lawrence suggests the Castle Workshop brand – their Davidson Twill Nomad pants ($168) are an Asher bestseller.

JACKET: Waxed cotton jackets are good for Seattle, for their lightweight, waterproof qualities. “They’re practical for the Northwest guy,” says Lawrence. The L.L. Bean Waxed Cotton Down Jacket  ($129) is available at L.L. Bean.

BOOTS: Wolverine boots are in for fall, and Lawrence says they’re a hit for the rainy weather that comes with the season. Wolverine also has a wing-tipped option for the more fashion-sensitive Seattle men out there. The Wolverine 1000 Mile Wesley Boots ($265) are available at sneakerhead.com.

There’s a little something for any Pacific Northwest dude at Asher. “Our customer is the confident man who doesn’t necessarily follow the trend but likes nice things,” says Lawrence. Now, doesn’t that sound like a Seattleite-Guy frame of mind?