A La Bonne Franquette puts an underdog Seattle neighborhood on the culinary map. 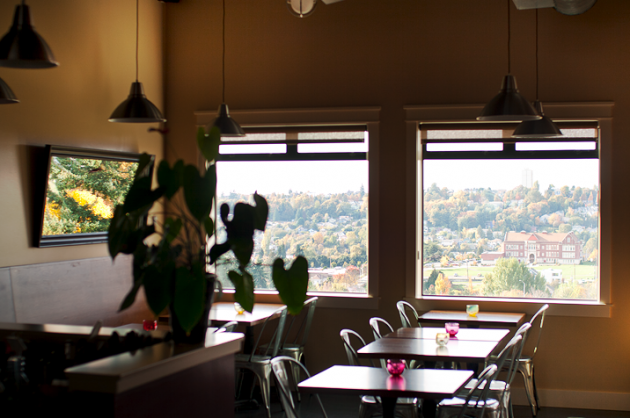 South of Leschi and north of Columbia City, the Mt. Baker neighborhood is an oft-ignored bleak patch in Seattle’s “Technicolor Dreamquilt” dining scene. Case in point: there is a pizza joint with pies that taste like they come from a mall and a thicket of toddlers underfoot so dense you feel like drunk Bigfoot bushwhacking through them to the register. 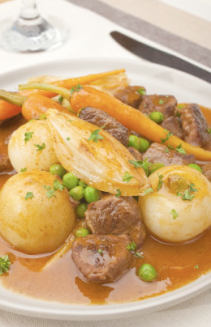 So with hopeful trepidation, I found myself ensconced in a cozy banquette at Mt Baker’s newest eatery, A La Bonne Franquette. Opened last August with no fanfare, the theme is casual French but the chef is from Sudan; the result is a spicy marriage of French bistro classics prepared from the global perspective that is de rigeur in today’s trendy circles.

The space itself hinges on a sweeping view of downtown Seattle, the Puget Sound and the stadiums. From virtually every seat in the house, you can gaze upon many of Seattle’s architectural treasures, such as the Amazon Building and Smith Tower. On the non-view side of the restaurant is an orderly, gleaming open kitchen where the staff stand at-the-ready to cater to your reasonable whims. Service is prompt, polite and delightfully honest. Although it’s not a family affair, it feels very much like it.

Yelpers have accused A La Bonne Franquette of being one-note in terms of flavor, so I tried to keep my selections varied. Since it’s a neighborhood establishment, they aim to change their menu so frequently that regular diners don’t tire of the same old thing, but staples like onion soup will always be available. While you must pay for the bread and butter, it’s worth the measly three bucks because the butter is creamier and more delicate than a Swedish virgin’s milkwhite skin and it’s dappled with Chardonnay oak-smoked salt crystals. 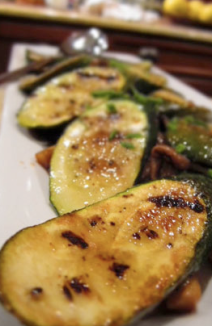 I had a roulade of chicken filled with mushroom duxelles on a bed of lentils, and my partner cut through the menu viscera straight to the ample lamb shank. While I’ve grown accustomed to the succulence only sous vide cooking can provide, the classically-cooked chicken was nonetheless unctuous and fork-tender. The lamb proved to be a standout example of what braising can do to a tough cut when an intuitive chef takes the reins. Each dish exhibited well-balanced spicy undertones that, sure enough, suggested France by way of somewhere exotic.

The wine list is small but well-edited. Diners of various price points should have no trouble. In addition they have a selection of local beers and I’m told a liquor license is likely in the works, which would be great for this neighborhood that currently lacks a stumbling-distance watering hole. I have to name-check recent culinary school grad pastry chef Shannon Lyons, who made a killer chocolate pot de crème that vanished from the cocotte so quickly it may have been a dream.

If you live in the neighborhood and you haven’t been, by all means put your money where your mouth is and go local. A La Bonne Franquette finally gives Mt Baker residents the utterly refreshing dine-in option it desperately needed.