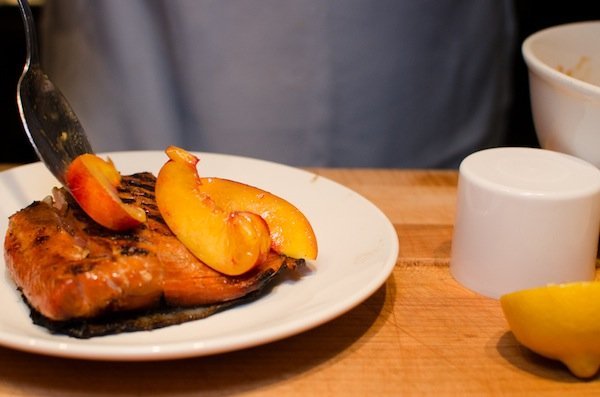 While October may be officially here, this weekend is promising to deliver the seventies and sun that make so many fall in love with our fair city. What better way to send out Summer than to take a trip to Ma’ono Fried Chicken and Whisky, the latest incarnation from Mark and Marjorie Fuller, the masterminds behind the wildly popular Spring Hill in West Seattle that has now evolved into a more casual eatery with a focus on Hawaiian fare.

Must Have Eats: As the name suggests, Fried Chicken is the restaurant’s siren song, but for those looking for smaller plates, the Happy Hour offers a lovely way to explore Chef Fuller’s menu, which is bursting with one unexpected twist after another, such as Spam Musubi ($6), an infamous Hawaiian snack which is most simply described as a slab of grilled spam, wrapped by rice and held together with seaweed, not unlike a piece of sushi. The Manapua (Steamed BBQ Pork Buns) are another house favorite made with pork belly, house steamed buns, and served with a Shoyu-harissa dip ($7).

Must Have Drinks: For those looking for something to wash down their Fried Chicken or Spam the 18 oz pours of select Draft Beers at $3.50 are hard to beat. Taps include Georgetown Brewery Pilsner, “Rogers”, Georgetown Brewery IPA, and Lucile. Happy Hour wines are also available at $6 glass and include a Chardonnay, Bubbles, and Ma’ono Red Blend.

The Inside Scoop: If a trip to Ma’ono isn’t in the cards this weekend, you can still experience one of their iconic dishes in the comfort of your own home, with a recipe for Barbecued Salmon with Fresh Corn Grits and Chipotle Nectarines, specially created by Chef Mark Fuller himself.

Grease grill. Place salmon, skin-side up on grill. Grill about 4 minutes. Turn fish: cook about 4 minutes longer or until salmon flakes easily when tested with a fork.