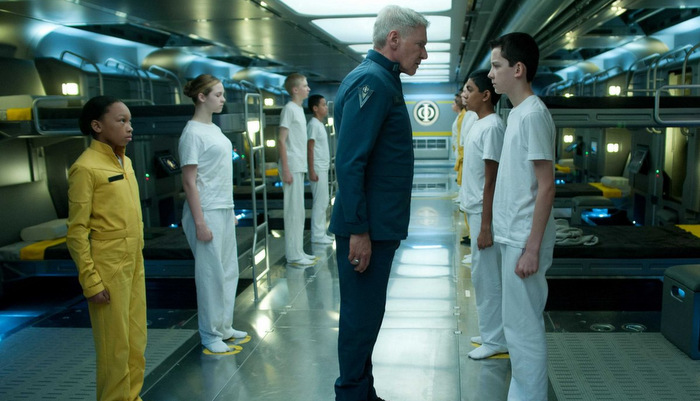 Ender, a natural born strategist, waxes philosophy like he’s Sun Tzu. Taking “The Art of War” to its next logical step, Ender believes it’s not enough to understand his enemy. For him, truly understanding your enemy comes hand-in-hand with loving them. When you know someone well enough to predict their moves militarily, you glimpse into their soul. All at once, this zen of inter-connectivity gives Ender an upper hand in battle but also puts him in a constantly state of moral dread. He knows he can be a mighty conqueror the likes of Caesar but doesn’t know if he should be.

Based on the popular young adult novels by Orson Scott Card, Ender’s Game is built on a foundation of tough philosophical questions like these. Tackling ethical issues that date back to the dawn of fighting with sticks and stone and span to our current climate of piloted drone warfare, moral quandaries are given precedence in the film, but often come across as heavy-handed and poorly thought through.

For a movie entirely about tactics, it’s lacking in tactical approach to philosophy as process. Socrates, famous for breaking down prejudices in order to reach universal truths championed the dissection of established beliefs through reasoning alone. To discover truth, he used critical analysis to better understand the world around him and the many false beliefs that dominated society at large. Here, Ender’s Game is philosophy as a means to an end, an “I told you so” of childish rashness rather than a contemplative, almost meditative, study. Rather than a thought process, here philosophy is a bat. Like Bonzo, you’ll want to be sure to cover your head from the beat downs to come.

Philosophical dissection of Ender’s Game aside, the film floats by on the freckled charm of Asa Butterfield (Hugo). Unlike his peers, Ender has a preternatural tact for foreseeing the consequences, good and bad, of his physical actions and a pension for using violence to prevent future violence. Butterfield does a fine job at conveying the dueling nature of Ender’s innocence and incessant scheming. At once aggressive and acutely aware of his dangerous aggression, Ender is a morally complex character – a suiting trait for the morally complex world he inhabits.

On Earth, 50 years have passed since a devastating alien attack almost wiped out the planet’s population. Like a post-9/11 America, tapestries hang in offices and homes alike, wallpapering sentiments of “Never Forget.” At the hands of the bug-like Formics, Earthlings faced their demise but managed a narrow victory in a play of much-celebrated battlefield bravado. One man, we are told, single-handedly chased the enemy off and ever since, Earth has awaited the return of their ruthless enemy, all the while training legions of child soldiers.

Picked as the last hope for humanity, children are utilized for their fast processing skills, unfaltering obedience, and gullible code of honor. Ender is chosen to lead not because of his tendency towards violence but because of his thought process within said violence. Never the one to start a fight but always the one to finish it, he’s not a sadist, but a tactician. For these qualities, Colonel Graff (Harrison Ford) sees Ender as the ideal candidate to lead Earth’s troops into the final battle with the Formic.

Joining Butterfield is a legion of youth actors that act little more than their age. Moises Arias as Bonzo and Hailee Steinfeld as Petra both do caricatures of the seething bully and flirty love interest but Abigail Breslin as Ender’s sister Valentine is really the most reined in of these child performers. Her character is harmony, her performance refined, a nice counterpoint to the violent lifestyle that Ender’s profession has surrounded him by. She and bullying older brother Peter are the fulcrum points around which Ender measures himself. As Colonel Graff says, he needs to fall somewhere between them. He must harness both violence and peace – he must become a cocktail of serenity and rage.

As Ender trains to become a commander, he must undergo physical challenges that hone his motor skills and mental games meant to whet his battlefield acuity. In a turn of revamped Quidditch – except without brooms, magic, or gravity – the “launchies” spent most of their days training in an arena-based game of space dodge-bullet, where they earn points for blasting each other with stunners. Like Quidditch, the game can be won, regardless of points accumulated, if one team member passes through their opponents’ gate unscathed. Unlike Quidditch, this tournament has bearing outside the arena as the victor will go on to lead Earth’s army against the evil bug aliens. Perhaps this convoluted plot point is more an issue with the source material than the movie, but I’ve never heard of a Superbowl winning team captain going on to lead an army.

Why the young launchies must spend so much time pushing their bodies to the limit when all eventual warfare is exclusively done through drone command is never addressed. Nor is the fact that regardless of the grueling training, none of the launchies – all of whom are on one side or the other of the scrawny-to-chubby spectrum – seem to put on any bulk or shed any pounds. They’re all in the same physical shape as day one. Surely this has to do with the fact that the film employs underage performers, and you can’t quite push a 12-year old to shed pounds like Christian Bale, but oversights like this are noticeable throughout and work to diminish the sense of reality director Gavin Hood is working so hard to create.

As the film pushes towards a close, the inevitable last act twist is somewhat foreseeable but nevertheless cements the relative worth of the film. Barking out commands with the crackly voice of a teen in metamorphosis, Ender leads his troops to video-simulated victory after victory until a crushing reality is revealed: maybe it’s not a game after all.

In blurring the lines between video game violence and real world violence, Hood explores the hefty moral consequences of drone warfare, even when he’s being too clunky for his own good. While I admit to not having read the book, the ending comes out of left field, begging for a sequel and an impending franchise. There’s a delicate art to franchise building that used to revolve around worth but nowadays is left at the behest of the filmmaker. It’s as if a “what comes next?” cliffhanger is a necessity for any movie that costs over $100 million dollars. The question is: if you build it, will they come?

While the communist undertones, expressed here as the “hive mentality,” may be outdated now, many of the issues seen in Ender’s Game are even more relevant today than they were when it was written (i.e. drone warfare, bullying, surveillance, video game violence, child soldiers, etc.) However, Hood can’t help himself but to let them fly in your face, like the drilling of drones in the film’s finale, never really developing the ever-important why? behind it all.