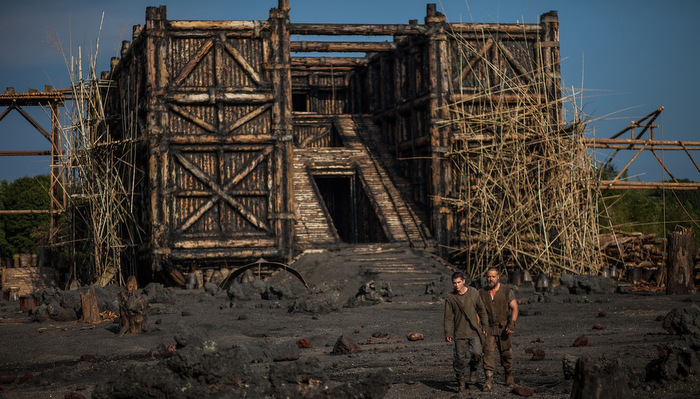 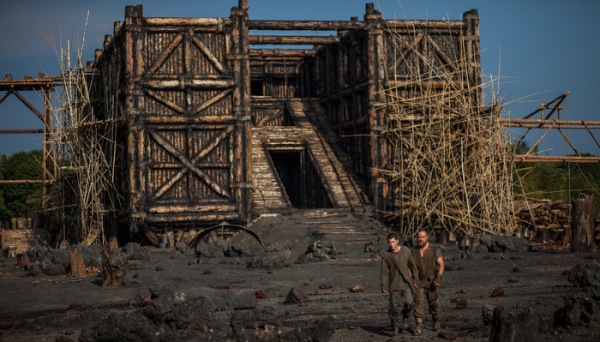 Glenn Beck has spoken. “Noah is just ridiculous,” Beck preached, going so far as to call the message contained within Darren Aronofsky‘s biblical blockbuster “danger disinformation.” Wise words from a man defending a story involving “the Creator” committing genocide against humankind, save for a 600-year old hero and his family (Genesis 7:6). For the creationist talk show host, ridiculousness exists only outside the confines of the Bible. But Beck is onto something.

No matter which side of the religious fence you fall on, you gotta admit that the story of Noah is more than a touch on the absurdist side. Even those interpreting the text at face value have to scrunch their face at Noah’s epic longevity. I mean the oldest man recorded on Earth weighed in at a whopping 123-years old and he can barely move, much less build an arc the size of the Empire State Building. At over five times that age, Noah puts your buff gramps to shame.

In what is one of the most well known Bible verses, Noah actually sets sail in his iconic arc on his 600th birthday. In Aronofsky’s film, Noah is played by 49-year old Russell Crowe, who during the duration of the film rifles through four different hair styles (a ploy to maximize action figures, I hope). Though 21st century scientists claim that a vegetarian diet will help you live longer and healthier lives, I’m seriously doubting that Noah’s hardcore vegan sensibilities led him to such preposterous supercentenarian status. Then again, his contemporaries do tear live animals apart by the chuck and seemingly consume them raw. Let’s just say, it’s a rough society.

Seeing that people are such dicks in Noah’s day, “the Creator” (who is never actually referred to in Aronofsky’s film as “God”) decides to put an end to the experiment that was humans. While his plans to cleanse the Earth with a devastating flood are explicitly stated in the Bible (“I am going to put an end to all people, for the earth is filled with violence because of them. I am surely going to destroy both them and the earth.” Genesis 6:13), this Noah’s communion with God involves more foreshadowing nightmares and less bright light and disembodied voices. Noah even has to visit grandpappy Methuselah (Anthony Hopkins) and trip out on some mushroom tea to realize “the Creator’s” design. Again, Crowe’s got it much harder than the Noah of the bible, for whom God lays out a list of materials and all the dimensions needed to build an arc capable of surviving his super hardcore flood. Apparently, God is quite the carpenter. Like father, like son.

But while Noah’s passage in the bible lasts only a handful of paragraphs, Aronofsky’s film stretches past the two-hour mark, allowing him ample opportunity to probe themes of good, evil and redemption. Though Genesis’s brief layout of Noah’s saga makes no mention of what actually went down in the year-long period where Noah and his family vegged out on the arc or how a guy six centuries old and his small, nuclear family could construct a boat big enough to house not only every single animal on earth but two of them, this is where Aronofsky gets imaginative.

With so little information to draw from, he’s got a license to frill. And though his interpretation may be hard to swallow for Bibleites and non-believers alike, remember, Aronofsky’s is a thematic fable. Rock monsters may invoke cries of nonsense in the real world but have their place within the framework of Aronofsky’s tale of redemption. Without the word of God whispering how to turn a magical forest into a big ass boat, it’s no wonder that Noah’s final product looks more like a wood shipping container than the arc of lore. Even the titular hero himself is a far cry from the bent-back and bearded saint from story books and Veggie Tales VHS’s. Instead, he’s a victim of his era, traumatized and dangerously devout.

From the grassroots inception of the film, Aronofsky talked at length about how he saw Noah as the world’s first environmentalist and environmentalist he is. Thanks to the lack of communication between Noah and “the Creator,” we see a man driven mad by his interpretation of His superior will. One could make the argument that Noah’s an eco-terrorist. Just about willing to commit infanticide for the good of the animals, the guy would make a great PETA president. He’s a man caught between divine will and his own humanity and the crossroads takes its toll. In this trademark reveal of fleeting sanity, Aronofsky puts his stamp on an ageless story.

Even though Russell is shown up at times by co-star Jennifer Connelly, and the film (like Noah) could use a good shave here and there, Aronfoksy and his crew of technical wizards are never off the mark from a visual standpoint. The tested and proved time lapse shot is often effective for imbuing a sense of passage but what they’ve done here is next level: painterly and epic, an epitaph to natural beauty. Even the CGI is used in fitful splashes, more the result of necessity than Aronofsky succumbing to overkill.

Noah lacks the signature claustrophobia of Aronofsky’s finest work but the eerie character turns we’ve come to expect from him are most certainly in play. His auteur touch and rich investigative storytelling gives life to a tale that could have been as dead as the bloated corpses we see polluted the sea. As Aronofsky tries to make sense of an emotional parable, often achieving such in stunning visual terms, Noah is a messy, disaster epic that works as a character study and red-blooded fantasy both.

Matt Oakes saw over 150 movies in theaters and probably drank more than his weight in beer last year. Check out more reviews at his website www.silverscreenriot.com and follow Matt on Facebook and on Twitter.