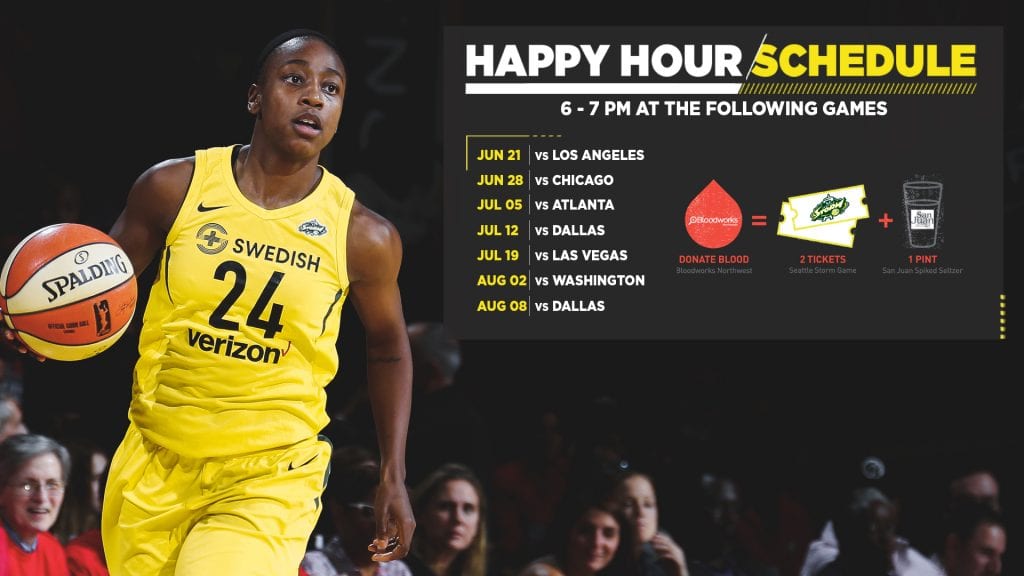 For every pint of blood collected, up to three lives can be saved. Last season, nearly 2,000 Storm fans donated blood at a Bloodworks Northwest Donor Center, saving an estimated 5,697 lives.

After donating blood at any Washington Bloodworks Northwest Donor Center, fans will receive a confirmation email, including a link to claim their tickets to a Happy Hour game. From the time doors open until tip-off, Happy Hour will feature $6 San Juan Seltzers and domestic beer in select areas of both Storm home venues (University of Washington and Angel of the Winds Arena). The Storm will host seven Happy Hour games this season, beginning Friday, June 21 at Angel of the Winds Arena in Everett, about 30 minutes north of Seattle.

At the arena, donors can stop by the Bloodworks Northwest booth on the concourse to receive a voucher for a free San Juan Seltzer. All other fans age 21 and older can enjoy the alcoholic sparkling water inspired exclusively by Pacific Northwest fruit flavors during Happy Hour for just $6.

On Friday, June 14, there will be a special kick-off blood drive in honor of World Blood Donor Day at the Everett Donor Center between 9:00 am to 5:00 pm. The first 30 donors will receive Storm swag in addition to the Happy Hour tickets. The Everett Donor Center is located at 2703 Oakes Avenue, two blocks from Angel of the Winds Arena, where the Storm will play three of its seven Happy Hour games. To schedule an appointment at any Washington Bloodworks Northwest Donor Center, click here or download the app.