Seattle is a city full of seasonal reminders. Starbucks’ Pumpkin Spiced Lattes hint that fall has arrived, and as the Mariners report to Arizona for spring training, clear skies and warmer weather are on the way. When a Warren Miller film comes to town, Seattle’s winter sports fanatics know that ski season is right around the corner.

For the past 62 years, Warren Miller Entertainment has served as a pre-season fix for adrenaline-crazed, snow lovers nationwide.  These films often play for just one night in more than 240 cities, as die-hard fans pack venues to witness world-class athleticism and mind-boggling stunt work atop breathtaking, HD-enhanced snowy landscapes. 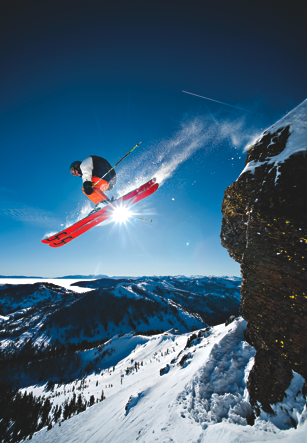 “…Like There’s No Tomorrow,” the newest entry from Warren Miller Entertainment, will be screened at McCaw Hall on Friday, Nov. 8. The film will also screen at venues in Kirkland (Nov. 9), Bellevue (three times daily Nov. 12-13) and Auburn (Nov. 20). A full schedule is available online.

“It doesn’t matter what’s going to happen tomorrow because you are living for the moment…and you are totally engrossed in it…and you are loving being there and being present like that. People who commit themselves to this lifestyle take advantage of it…like there might not be a tomorrow.”

From New Hampshire’s Mount Washington to the Chilean Andes, Squaw Valley in California to the Himalayas, renowned athletes such as Chris Davenport, Hugo Harrison, Julia Mancuso, and Steven Nyman ski down near-vertical slopes and perform the kind of gravity-defying stunts most can only expect to find in video games.

To get Seattleites even more pumped up for the coming season, places like Whistler Blackcomb, White Pass and Crystal Mountain currently offer discounts and deals on lodging, lift tickets, or gift shop purchases to those who see Miller’s latest flick.

Ski season is coming.  So let Warren Miller help you help you get pumped up for winter …like there’s no tomorrow. Tickets are available online.