Fine dining and imbibing in the City of Angels.

It’s freezing in Seattle! There is nothing sexy about that. Well, unless you don’t wear a bra and like to sport the “turkey’s done” look for your admiring co-workers all day, but that aside…

It’s time to fly the coop for a long weekend of sunshine and good food and there’s no better place to get closer to the scintillating sun than Los Angeles. Hop on a Virgin America flight like the good little cool kid you are and while away the two-and-a-half-hour jaunt sexting with your fellow passengers, using Virgin’s inter-seat chat feature.

Once you land in L.A., rent a hybrid vehicle (you want to fit in with the locals) and head straight for the Roosevelt Hotel in West Hollywood (WeHo, to those in-the-know). The Hollywood Roosevelt is ideally situated in the heart of the city’s bangin’ dining scene. It’s a chill celebrity mecca with first-rate watering holes inside its storied walls.

Before you hit the town for dinner, head into the Library Bar on the lobby level and order the Santa Fe. This spicy, tequila-based concoction will prep your tastebuds for a wild ride as the cucumber and jalapeno compete for your mouth’s affection. After you’ve eaten your fill from the hotspots listed below, stumble back into the secluded Spare Room located one level above the lobby. There’s a vintage bowling lane and lots of eye candy, sure, but the wannabe actor bartenders also deftly infuse craft into their cocktails.

The meaty brethren behind WeHo hotspot Animal have recently opened a seafood-focused sister called Son of a Gun. Run, don’t walk to taste expertly-meshed aquatic edibles like sea urchin with burrata — who knew that would work so well? Expect to rub shoulders with movie execs and industry insiders at the cozy communal table.

Ludo Lefebvre, of gypsy pop-up phenomenon LudoBites, rolled out version 8.0 last week. The reservations were gobbled up on OpenTable in two minutes flat, saddening many rejected would-be diners, but all is not lost. An entire bar (6-7 seats) plus (possibly) an additional table are kept exclusively for walk-ins, and this seems to be a well-kept secret. It’s really no trouble to get a seat if you plan to arrive early and don’t mind waiting with a glass of wine, expertly-chosen by som Whitney Adams and poured by dashing bar whiz kid Michael Nemcik.

Funny, charming and talented Chef Ludo makes chicken so good you’ll want to rub it all over your lover’s body and nibble it off, and the uni crème brulee is not unlike licking moist mermaid nipples. Ludo’s ever-smiling wife Krissy (wo)mans the front-of-house. Get there before Wednesday, Feb. 22 for an unforgettable meal. 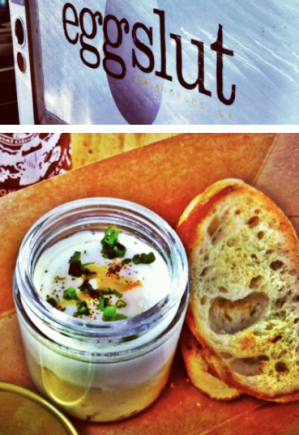 Eggslut food truck, a breakfast MUST, is conveniently parked in front of espresso paradise Coffee Commissary. Eggslut coddles eggs the way Ron Jeremy coddles breasts, that is to say with much ovoline authority. Adjacent to Eggslut is Lindy and Grundy butcher shop — a place so full of throbbing meat you’ll steam up the windows with pure carnal envy.

One final don’t-miss is Ink.Sack, the oddly-named lunchtime little sister of the Voltaggio brothers’ L.A. eatery, Ink. They proffer mini sammies of all kinds, from the ever-popular Banh Mi to the Jose Andres (packed full of serrano, lomo, chorizo and manchego). Get three apiece (you’re on vacation!) and don’t walk out without a snack bag of the pineapple, chili y limon.

As you eat out, take advantage of L.A.’s burgeoning walk-in only policy. Many restaurants only seat walk-ins, while others still allow for reservations but reserve a large portion of the dining room for those who stroll in off the street.

Take my advice — get your sun on, grub out and be happy. You’ll be much sexier for it. Now go eat L.A.!