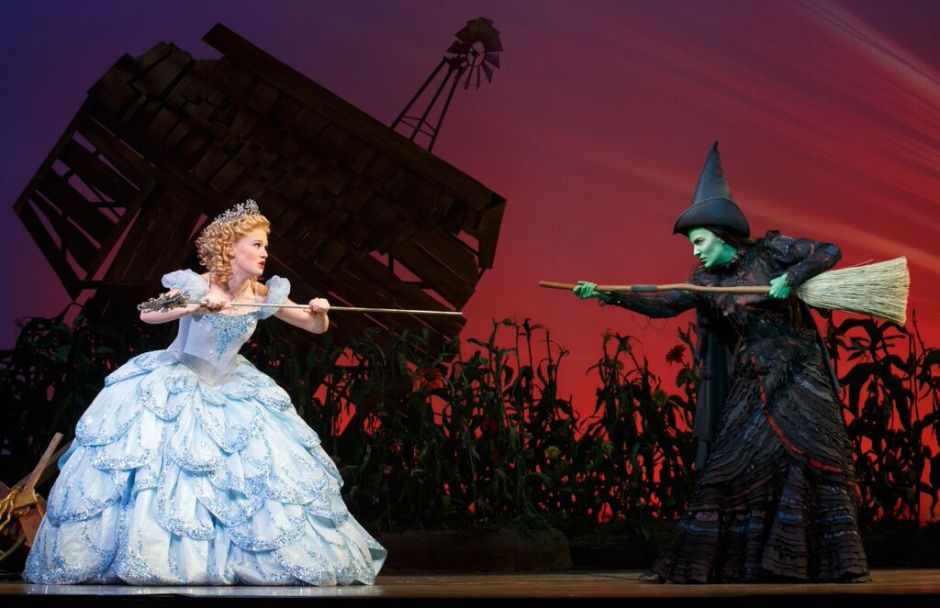 When Wicked was published back in 1995, as a young budding writer, I was curious how another author could possibly try to piggyback on arguably one of the greatest novels of all time. I would later learn the art of stories told from unusual perspectives, and the fact that a 40 year old man nailed this disliked wench’s point of view and dove into the dark depths of Oz head on makes this a success in my book. This adaptation told through the lens of the not-so-wicked witch of the west is a twisted time honored tale of an unlikely friendship, the politics of a picturesque universe and how being “different” is actually trending.

The broadway production of Wicked has since won over 100 international awards including a Grammy and 3 Tony nods, gaining widespread success on stages across the nation – and for good reason. This production is maybe the best, if not certainly among the top 3 productions I have EVER seen. From the immaculate props and enchanting sets to the precision of detail that clearly went into costume design, this show will keep you entertained from curtain rise to fall. I’m not generally one to gush about sunny happy musicals, so the balance between the hauntingly dark scenes featuring the Wizard, and the satirical over the top performance from show stopper “the Gah is silent” Glinda was sheer perfection. Also worth noting: remember that boy band O-town circa early 2000’s who had that ridiculously graphic hit song about nocturnal emissions? Front-man Ashley Parker Angel is Wicked’s picture perfect Fiyero, (and they must have him doing some serious squat workouts, he still has an ass that won’t quit!). I sat down with local Marysville transplant and Wicked ensemble member Kelli Erdman this week to get the inside scoop on Wicked behind the scenes at the Paramount.

Give us the deets on your background – what do we know you from?

Kelli: I grew up in Marysville, WA and graduated in 2010. I studied dance at Westlake Dance Center, and after high school I moved to LA to pursue my dancing career. After I joined the dance program at Edge Performing Arts Center I got an agent, started doing commercials, tv and film. You may have seen me on a little show called Glee, The Fosters, or several commercials.

TV and theater require a very different and unique set of skills. How do you like performing in front of a live audience?

K: A live audience is so great because you get reactions from the audience and you feed off the energy from them – I love both [tv and theater], it’s fun being in front of the camera! It’s cool because even though we do the same show night after night, the shows are different,  we improvise, and things change night after night – it isn’t always exactly the same.

What is your favorite aspect of this Wicked production?

K: Wicked is such an amazing show, it has been called a cultural phenomenon, so many people are coming because it has such a positive message. It illustrates the difference between good and bad, building friendships, and is a show for all audiences – anyone can relate to the characters in the show. You don’t hear songs like this in the media these days, it is a really cool thing to see. The talent is incredible, and the dancing is fantastic!

This is your first Broadway show – are you excited to perform in your hometown?

K: For this performance to be my first is HUGE! I saw Wicked at the Paramount when I was in high school, and it’s seriously a dream come true to be performing the same show in my hometown. The fact that I get to have my friends and family watching keeps me that much more connected and it’s great!