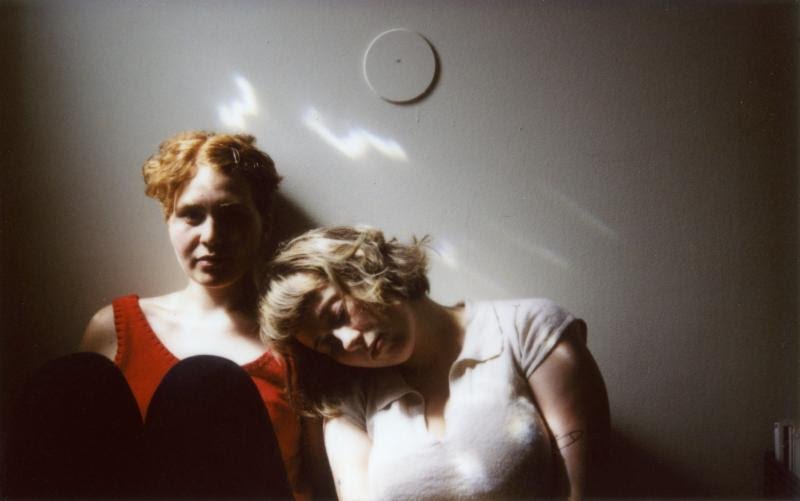 Check out Grandstand Media artists at Block Party this weekend.

The Coathangers’ casual approach to making music will shake you with their devil-may care / rowdy house-show vibe performances. Their most recent and fourth album ‘Suck My Shirt’ (Suicide Squeeze Records) is their catchiest, most mature yet – jarring, raspy, tough with solid melodic hooks akin to Sleater Kinney, or the art-pop of late-era Le Tigre – receiving critical acclaim from Pitchfork, Rolling Stone, Nylon, Paste and many more.

Born and raised in Los Angeles, Girlpool is a Philadelphia based two piece made up of Cleo Tucker (Guitar) and Harmony Tividad (Bass). The two met at Los Angeles DIY venue the Smell and quickly grew very close. Their sound is raw, comprised only of a guitar, bass and vocal harmonies. Cleo and Harmony use this stripped-down instrumentation to accentuate their vulnerable yet powerful lyrics.

After releasing their self-titled EP, Girlpool relocated to Philadelphia at the end of 2014 looking for change of pace and scenery. There they recorded their debut LP, Before The World Was Big, with Kyle Gilbride (of Swearin’. Engineer behind Waxahatchee’s Cerulean Salt, Radiator Hospital’s Torch song, etc). Before The World Was Big explores the concepts of growth, friendship, and the interaction between identity and environment. The introspective-punk duo captures growing pains and existential quandaries with a honest and true intention.

Jamie xx is one of the members of the highly successful English band the xx as well as a music producer and remix artist. He released his highly anticipated debut solo album In Colour to overwhelming and universal critical acclaim – it garnered a 9.3 score fromPitchfork, four stars from Rolling Stone, and TIME said In Colour is “one of the year’s most striking albums so far.”

The release of the album comes on the back of an incredible six year creative period for Jamie xx, which has seen him alternate effortlessly between his role as founding member and producer of The xx, and creator of more electronic and club orientated music as Jamie xx.  A string of acclaimed productions in recent years , remixes for the likes of Adele, Radiohead and Florence & The Machine, production work for Drake and Alicia Keys plus We’re New Here – Jamie’s seminal reworking of Gil Scott-Heron’s final studio album – hinted at what was to come. With In Colour – a bold, celebratory, emotional record –  Jamie has delivered his definitive artistic statement.

Summer Cannibals aren’t wasting any time. Known for their head-turning live show, the punk-flecked four-piece from Portland hit the ground at full speed, releasing their 2013 debut album No Makeup, touring with bands like Chvrches and the Thermals, and landing the #2 slot on the “Best New Band” list in Willamette Week. Their new full-length, the raw, to-the-point Show Us Your Mind, has already seen praise from the likes of NPR, Entertainment Weekly, KEXP, Sound Opinion, Bitch, Impose, among others. As before, Summer Cannibals come armed only with the things they need: fuzz pedals, razor-sharp riffs, and songs that get stuck in your head the first time you hear ’em.

Toro Y Moi’s new album, What For?, was written and recorded over the course of eight months at his home studio in Berkeley, CA, with Bundick’s meticulous production capturing the feel of a rock band playing together in the same room. Stereo-panned guitars sit high in the mix next to buzzing synthesizers, funky keys and live drumming, with members of his touring group as well as guest musicians like Unknown Mortal Orchestra’s Ruban Nielson and multi-instrumentalist Julian Lynch all contributing to the sessions. While Bundick cites Big Star, Talking Heads and Todd Rundgren, as well as the psychedelic soul of Brazilian legend Tim Maia and the ’70s-era jazz-funk of France’s Cortex, as some of the inspirations behind What For?, these names just act as signposts dotting Toro Y Moi’s vivid musical landscape. Even as this may be his most direct outing to date, the nostalgia and reflective essence of these songs remain very much his own.