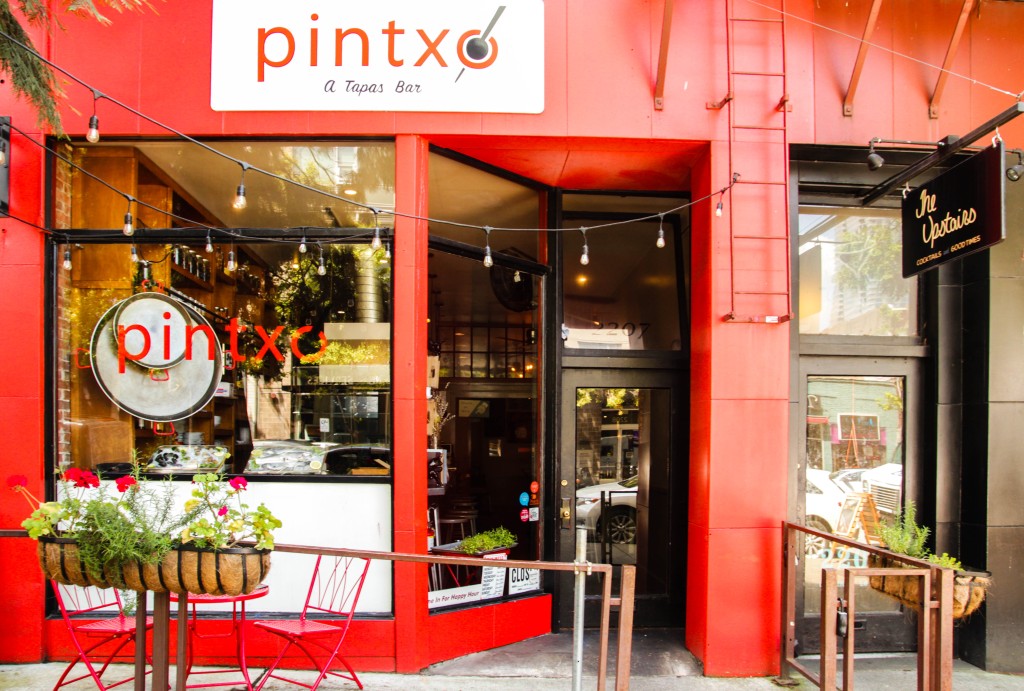 Pintxo (pronounced peen-cho) is a Spanish Tapas Bar located in the heart of Belltown. Pintxo’s micro-kitchen, smaller than most food truck kitchens, produces a vast array of Basque small bites from traditional favorites to modern takes on the traditional dishes from various culinary regions of Spain, including San Sebastian, Barcelona and Madrid. Originally from the PNW, Chef de Cuisine David Haight joined the Pintxo team last month after training in Oregon and working in Vancouver (BC), Napa (CA), and Woodinville at Willows Lodge.

Working in Pintxo’s small but mighty kitchen, and without a gas grill, Chef David Haight and Sous Chef Emelio Sansone source a majority of the food locally and have fresh ideas to create flavorful dishes. The seafood-forward menu often consists of unique ingredients such as house cured King Salmon and Pacific Octopus.

The new summer menu features Patatas Bravas, crispy fried potatoes with aioli and braves sauce. Charcuterie is great to share with Chef’s choice of Iberico meats (sourced from Spain), house-smoked trout rillettes, Spanish cheeses, and pickled accompaniments. Pintxo’s rendition of Churrasco with local Carlton Farms pork shoulder and seared on the plancha with mojo rojo and mojo verde is juicy, balanced, and cooked perfectly. The Cod Fritter with a chickpea batter is delicious with a nice crispy crust served with an onion marmalade and Harissa aioli. Bonus: a majority of their menu is gluten-free.

The beverage menu features wine, liquor, beer and cider/cidra from Spain, although local wine and beer are also readily available and easily paired with Pintxo’s bold and flavorful food. My husband had an amazing Moscow Mule and my Gin and Tonic was super refreshing. Also, I asked if they had lemonade and if they could pair it with vodka. Our server came back with a glass of house made lemonade, bubbly, and vodka that was one of the best I’ve had.

Like Pintxo’s kitchen, the dining room is intimate and features bar and table seating as well as a front and back patio on sunny days and a well lit indoor atrium.

Chef de Cuisine David Haight has a background in Classical French and bistro style dining. While working in San Fransisco he developed a passion for tapas and Basque food. Growing up in the Pacific Northwest allows him to easily combine Spanish fare with the seasonal Northwest ingredients. Prior to joining Pintxo, David worked at Le Crocodile (Vancouver, BC), Angèle (Napa, CA) and Willows Lodge (Woodinville, WA). He is a graduate of the Oregon Culinary Institute.

Sous Emelio Sansone is a graduate of Oregon Culinary Institute. He got his start in cooking at a Portland food cart before working in some of Oregon’s award-winning restaurants and purveyors, including Olympic Provisions and Castagna.