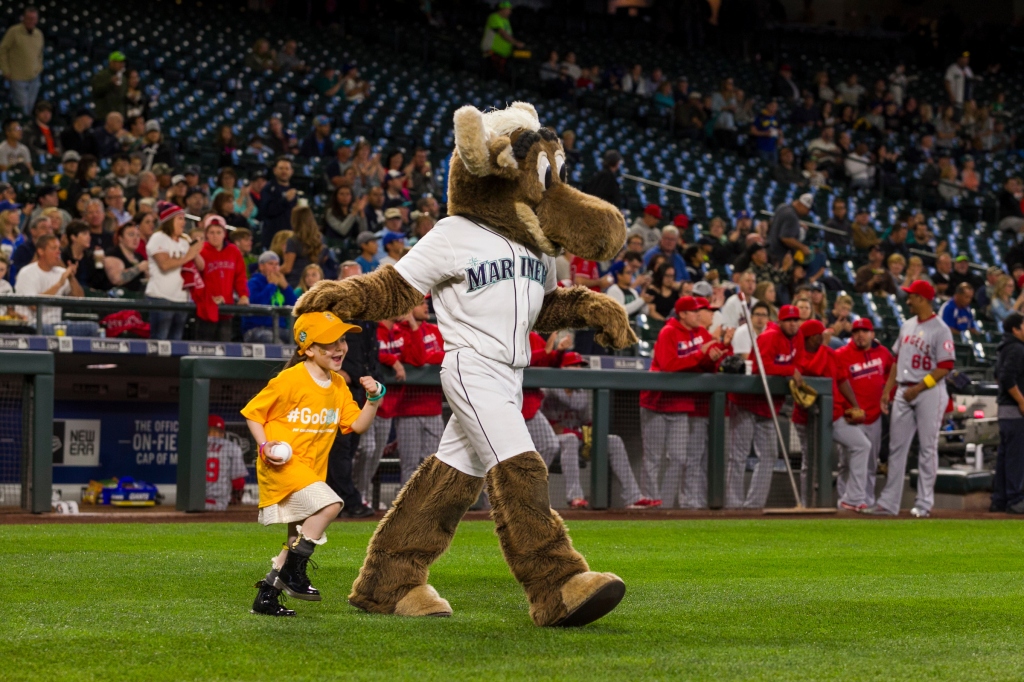 When cancer rocked the lives of Gail Lopez’s family, she decided to take action by starting G1ve a Buck Fund, an incredible nonprofit that raises awareness and much-needed funds for childhood cancer research. Somehow, current research is outdated by 20-plus years, and this organization aims to fight every hurdle to help save the lives of little superheroes near and far.

As part of September’s Childhood Cancer Awareness Month, the organization partnered with the Seattle Mariners to hold a fundraiser during their September 2nd game, turning entire sections of the stadium into an eye-catching sea of gold. Read Gail’s story below, and consider donating (even one buck!) to her noble cause.

Q: Why is this cause so near and dear to your heart?

On September 25, 2011, my 12-year-old daughter, Kate, was a normal kid, playing soccer and starting 7th grade. By 9:30 a.m. on September 26, she had become a kid battling cancer. An X-ray showed she had a mass in her femur and the next thing I knew, we had an appointment to see the orthopedic oncologist the next day.

I was desperate to understand the reality of the situation, but had absolutely no information to make any decisions. I drove home from that appointment and went straight to Google to find out everything I could, but there wasn’t much information available. The doctors just told me to figure out, as soon as possible, where I wanted her to start chemotherapy treatment. How was I supposed to make that decision without any information? And what did this really mean? What kind of treatment did she need, and for how long? Would she keep her leg? Would she live? And, WHY was there no information?

The huge lack of awareness about childhood cancer quickly became very obvious. It was like this little secret world; you only knew of it if you were forced to live in it. Sure, you see the billboards of the sad bald kids, but you immediately push it to the back of your mind, thinking, “This happens to other kids; it would never happen to my own.” It’s just too sad to think about.

But it happened just like that, in the blink of an eye. What we thought was a pulled muscle was cancer, and our lives were changed forever.

Once you are “inducted” into this world, you are never allowed to leave. There is always that worry in the back of your mind that it will return. Kids who are survivors will never quite be the same. Physically, emotionally and psychologically, cancer takes a huge toll on these kids. Because of the harsh treatments, 90% of childhood cancer survivors will have significant health-related issues by the time they are 45. And those are the lucky ones who survived. 1 in 5 children will die when diagnosed with childhood cancer.

Q: How is your daughter doing today?

Kate is now 17, a senior in high school and applying to colleges, hoping to get into a nursing program to become a pediatric oncology nurse. She has a great attitude, appreciates being alive and wants to give back to kids like her and follow in the footsteps of the incredible nurses who helped save her life.

That is the sunny side of things, but cancer changes these kids. The end of this month marks five years since she was diagnosed. She has gone through so much in those five years. The hardest part for the kids who survive is what they’re left with after they’re declared “cancer free.” Everyone celebrates, thinking it’s over. But it’s never over. Since Kate was declared “cancer free,” she has had four additional surgeries on her leg and she still has one more to go. She was an athlete before cancer, and now is in pain after walking any distance. She has learned to deal with the pain, but it is a daily reminder of cancer and what it has taken from her. There is always the fear that the next scans will send her back to treatment. She has attended far too many funerals of friends she met through treatment. It’s more than any kid should have to endure.

It’s tricky. People say to her, “At least you are alive.” Yes, we are so grateful that Kate is still with us. But at the same time, the reality of childhood cancer is about much more than being dead or alive. It is not easy on these kids.

Q: What did the process look like from deciding you wanted to take action to actually launching the nonprofit?

To be honest, G1ve A Buck Fund is still very much in the launch stage. It’s an ongoing process.

It all started when Kate was in the hospital getting treatment. I was watching NFL in October, and everything was pink. I thought about what the “pink” campaign had done for breast cancer, and it seemed to me we could do the same thing with “gold,” the color of childhood cancer awareness, to raise awareness and funds to develop childhood cancer treatments. It was clear to me that awareness is the first step.

Due to the lack of awareness, very little funding is available for research, causing a severe lack of childhood cancer treatments and therapies specifically for children. The truth is, funds must be raised through private donations. It’s going to take families and nonprofit organizations to raise the funds to get the needed research done.

My idea was to engage Major League Baseball to “#GoGold” for childhood cancer like the NFL had done for “pink” for breast cancer. But how would we get involved with Major League Baseball? It took time, patience and persistence. Just like battling cancer itself, you have to keep going and keep talking to people; keep pushing and never give up. There have been times when doors have closed and there are times when I can’t even see the door. But I just hoped that if I stuck with it, I would meet the right people at the right time who would say YES. G1ve A Buck Fund is a collection of all those people I have met who have said “yes” and jumped on board to make a difference.

Q: What are the most important issues/misinformation you’d like to bring to light?

My goal is to educate people on the facts so that they understand the reality of childhood cancer and, most importantly, get them to realize they have the power to change this reality. The concept behind G1ve A Buck Fund is simple: Instead of asking a few to give a lot (although we would take that too!), we’re asking everyone to give a buck. If on MLB Childhood Cancer Awareness Day, we could collect ONE dollar per seat sold per team, we would raise close to $1 million in a day. It’s all about $1 at a time. If everyone who bought a cup of coffee gave it up for just one day and instead donated the $3.25 to childhood cancer research, it would add up quickly.

I think we have become numb to cancer. Why don’t we have a sense of urgency to help our kids? Statistics (curesearch.org) show that nearly 3,500 kids (ages 1-19) in the United Stated will die this year from cancer. This is close to the same number of people who died in the 9/11 terrorist attacks at the World Trade Cancer 15 years ago. Look at the money and resources we have put into stopping the terrorists who took the lives of those innocent people. Count up the number of innocent children who have lost their lives to cancer since then. It adds up to nearly 50,000. If Safeco Field were filled with only children and were bombed, killing them all, wouldn’t we do everything possible to stop the terrorists who took those lives? So why don’t we?

Decide to make a difference; if we were all to get involved, we would create change.

Q: In what ways can folks donate or get involved?

You can make a donation at g1veabuckfund.org. All donations raised from the Seattle area will be combined with our efforts at the Seattle Mariners game held on Sept. 2 and will be donated to the Seattle Children’s Hospital’s Strong Against Cancer program. You can also start your own fundraiser, and involve your school, work and family. Email info@gabfund.org for more information.

And if you aren’t able to make a donation, help us raise awareness. September is Childhood Cancer Awareness month, and we’re asking that everyone spread awareness on social media! Post a photo of you, your friends and family with a sign #GoGold for Childhood Cancer. Or go to G1veabuckfund.org and create your own #GoGold sign to show the world who you go gold for and post it to your social media. Tag #GoGold and #g1veabuck. Help us make “gold” go viral.

Q: What have been some of the most rewarding moments of your work so far?

Convincing Major League Baseball to get behind this cause has been the highlight of our efforts so far. To see players wearing a gold ribbon on their uniform and gold wristbands was incredible. They showed the world that they care about our kids and they’re willing to be a voice for them to create change. It is a start! I am just part of a much bigger picture; it takes a village. I have been so fortunate to have people jump on board with G1ve A Buck Fund to help. G1ve A Buck Fund would not exist without the help of so many.

Q: What advice and encouragement would you give others wanting to take a stand for issues they feel passionate about?

I am a perfect example that one person can inspire others to help create change when change is needed. One person alone can yell and scream all they want, but it’s hard to be heard over the crowd. I do believe there is power in numbers, and together we can create the change needed to raise awareness to fund necessary research for childhood cancer to give these kids better treatments, and hope for a future and a healthy long life.