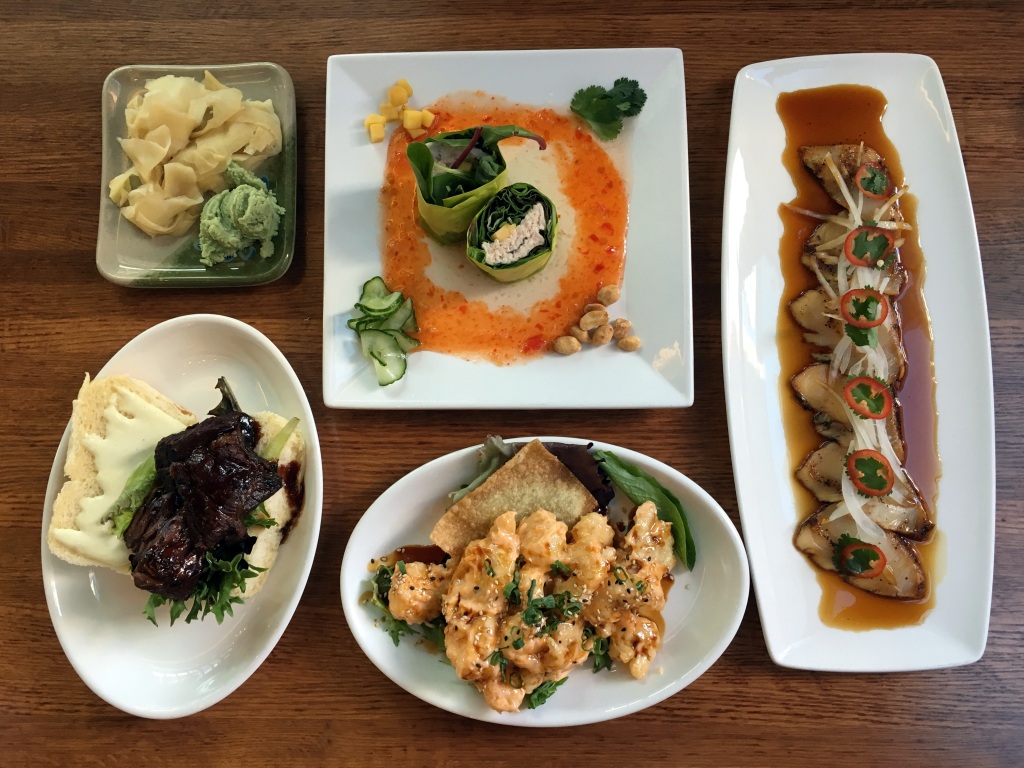 Sansei Seafood Restaurant & Sushi Bar, the famous Hawai’i sushi spot that opened its first mainland location in Seattle in 2015, is serving up some outstanding happy hour fare in downtown Seattle. Located across the street from the Paramount Theater, the new happy hour runs from 4:30 to 6:30 pm every day with a late night happy hour from 10:00 pm to 12:00 am on Friday and Saturday evenings, making this the perfect destination for your pre- or post-funk when venturing out to a show. With an extensive happy hour menu ranging from $5-$8 per dish (including some only available on the happy hour menu), these deals are not to be missed.

We had been told prior to visiting that Sansei’s chefs were known for their creative and innovative specials, and they certainly did not disappoint. We started off our happy hour with a few of their flagship items, including some award-winners in the Panko-Crusted Fresh Tuna Sashimi (that Soy Wasabi Butter Sauce tho!) ($7), Sansei’s Shrimp Dynamite ($7), and Sansei’s Mango Crab Salad Hand Roll ($6).

—Before I continue, I have to note how sensational Sansei’s Mango Crab Salad Hand Roll was. While everything I tried was outstanding and will have me coming back for seconds, this was one of the most delicious dishes I have ever had the privilege of eating. And healthy, too! I would eat this every day if I could. Now, on with the review—

Needless to say, all of the award winners were top notch and are an absolute steal at those prices. We were also fortunate enough to try the Kimchi Pork Belly Brussels Sprouts, Braised Short Rib Sliders, and Cajun Seared Sashimi. The Kimchi Pork Belly Brussels Sprouts had a perfect level of spice and the flavors worked together wonderfully. For any meat-averse folks, they also do a meatless version using mushrooms in place of the pork. The sliders were tender and had a hint of wasabi that really allowed them to stand out. The Cajun Seared Sashimi was yet another item that would’ve been the star of the show at any other restaurant, with sweet onion, cilantro, jalapeño, and Chef Masa’s yukke sauce striking up a perfect balance. Some other items featured at happy hour include:

For those of you looking to get your drink on, there are some solid drink specials going on as well including $3 beer (Rainier and Miller Lite Tallboys!), $4 martinis, $5 sake, and $7 house cocktails. Get yourself some top-notch happy hour treats while you’re out downtown and thank us later.

Sansei is located across the street from the Paramount Theater and features a bar, dining room and patio. Sansei is open Sunday through Thursday from 4:30 to 10 p.m. and Friday through Saturday from 4:30 pm to midnight.