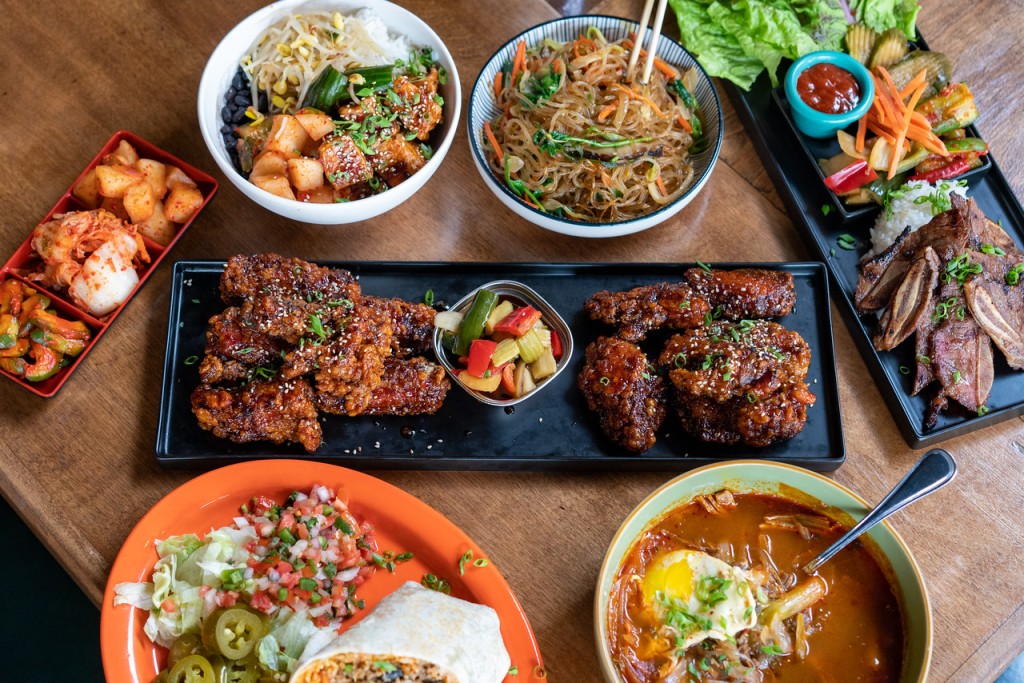 For owner Suzana Olmos, the opening of Lazy Susan in Lower Queen Anne is a homecoming in more ways than one.

The new Korean-Mexican gastropub is partly a relocation of her former and greatly loved Interbay restaurant, Citizen Six. Lazy Susan is just two blocks from Citizen Café & Citizen Campfire, Olmos’s first and second neighborhood eateries, and also blocks away from her own home.

The fusion of Korean and Mexican comes from Olmos herself. “My dad is of Mexican descent, and when my mom first moved to the US from Korea, she spent a year living with my dad’s family, learning his family cooking,” says Olmos.

When Olmos opened Citizen Six in 2016, she brought her mom into the kitchen so that she could help the chefs get her fried chicken recipe just right. Earlier this year, in the midst of her transition from the Interbay restaurant to the new location in Lower Queen Anne, Olmos’s mother’s health took a turn for the worse, resulting in her losing her ability to speak after suffering a stroke. Missing her mother’s voice, Olmos was inspired to make the relocated restaurant a homage to home and family, and to her mother—to allow her mom to speak, in a sense, through its presentation.

Olmos’s inspiration behind Lazy Susan is so moving. Family as the centerpiece comes out in the food and the space. We stopped by for dinner on a rainy Saturday recently, and walking into Lazy Susan felt like we were stepping into a space that was inviting us to settle in and have a good time. Surrounded by couples, friends, and families, we dug into Lazy Susan’s expansive menu.

We knew we wanted to try Olmos’s signature Korean-style fried chicken wings. We ordered the Ginger Soy Six-Piece Fried Chicken Wings, which were absolutely delicious. The amount of sauce was on point, and the fry was just the right amount of. However, when Olmos walked by our table and saw that we had not ordered the signature flavor, she graciously sent out an order of the Double Fried Crunchy, Sweet & Spicy Garlic Fried Chicken Wings for us to try. While both flavors were amazing, the signature flavor is their signature for a reason. We were shocked by the amount of chicken on each wing as well. This is definitely a must-have item on the menu.

Next, we ordered the Korean Marinated Beef Tacos with tender, marinated strips of bulgogi beef, spicy cucumber mix, caramelized onions, and Mexican cheese piled on tortillas (you can choose corn or flour), served with housemade salsa verde, black beans, Korean fried rice & Sriracha mayo. This was our second favorite, right behind those wings. The portions were generous and the flavor was bold.

The last dish we tried was the Kimchi Fried Rice Bowl with sautéed carrots, peas, onion, egg, garlic, soy, and we opted to add spicy pork. Another delicious dish that luckily made for excellent leftovers.

We will definitely be coming back to Lazy Susan for the fried chicken wings and to sample the rest of Olmos’s varied and interesting menu. There is a Korean kimchi ramen bowl, kimchi mac and cheese, burritos, two burgers, and more!

While the space fits right in as a neighborhood spot, it also offers a tropical oasis much-needed for the rainy months ahead. The restaurants’ warm, welcoming decor, designed by Olmos and good friend & local designer Aysin Yenigun, takes inspiration from her mother’s taste for mid-century modern and green thumb combined with her daughter’s love of tropical flair.