One bumpy bus ride, three downed bottles of water and 230 miles left in the dust toward Seattle, this wine scribe made her first appearance in the delightfully charming village of Hood River, Oregon. The streets are lined with mom n’pop businesses, endearing antique stores and tudor-style homes that have held their ground for decades amongst some of the Northwest’s most breathtaking landscapes, including the steeply cut Columbia River Gorge and the stunning Multnomah Falls. 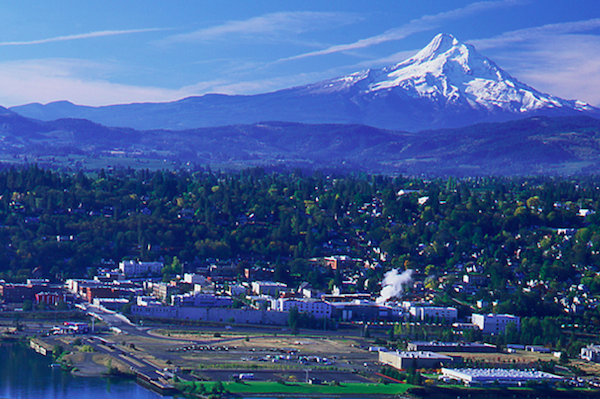 Home to Full Sail brewery and a number of smaller craft brewers, Hood River houses many tasting rooms of Oregon and Washington wineries of the Columbia Gorge alike. Courtesy of the Oregon Wine Board, I was introduced to nearly twenty producers that fall into this AVA that I had hardly or never heard of in their media Oregon familiarization tour that made its first stop in Hood River.

The Columbia Gorge AVA, which proclaims itself as “America’s Most Unique Wine Region,” encompasses both Oregon and Washington wines and sits an hour from both Portland and Walla Walla. Located between two pillars of mountains, Mount Hood and Mount Adams, the region is set apart with soils that were carved by ice-age floods and enriched with volcanic soils, marine breezes that crash against hot desert air in the summer and farmers of the valley with extensive resumes in fruit growing, most recently with wine grapes.

Although the tour’s focus was on the eclectic and eccentric wines of Oregon, such as the insightful and trailblazing wines of Amity Cellars and Sokol Blosser was well as the eloquent and expressive sparkling wines of Argyle, Soter and Meriwether, one particular producer stood out to me while in Hood River. And it was from AniChe Cellars in Underwood, Washington, a mere 6.9 miles from the town we were in, which gave me harsh hankering for a specific Seattle poultry plate.

The Restaurant: Betty Restaurant & Bar — Mirroring its sister restaurant, Crow which is situated at the bottom of Queen Anne, Betty sits high and mighty at the crest of the butte, holding its own while its neighboring restaurants have come and gone. Loved for its comfort dishes and bistro-style rotating menu, Betty (and Crow for that matter) provides an environment free from hardship and affluent in affordable pricing, multi-diet friendly courses and cozy service. An open kitchen gives a peek at the artistry in action with a seated chef’s counter top, a bar slipped into the back corner and a narrow yet inviting dining room decorated with lively paintings to contrast the dim lighting.

The Dish: Pan-roasted chicken ($18) — With the skin crisped by culinary precision, the meat inside the brittle exterior of the chicken is sumptuous and tender. Seasonal vegetables and fingerling potatoes prance around the bird as backup dancers while the chicken takes the only spotlight available on the plate. Akin to the pancetta-wrapped bird at its sibling eatery, this is easily one of the best roasted chickens served in the city.

The Variety: Roussanne+Marsanne – The power duo of Rhone white blends that are rarely seen apart, this pairing of besties was revitalized outside of France in the 1990s by California’s Rhone Rangers, the renegade group of winemakers who sought to popularize their state’s spin on Rhone wines. The two grape varieties when blended together come out voluptuous, spicy, mineral-driven and loaded with stout summer fruits, additionally with the structure and shape the varietals would not pull off single-handedly. They are essentially, as Jack Johnson would croon, better together. 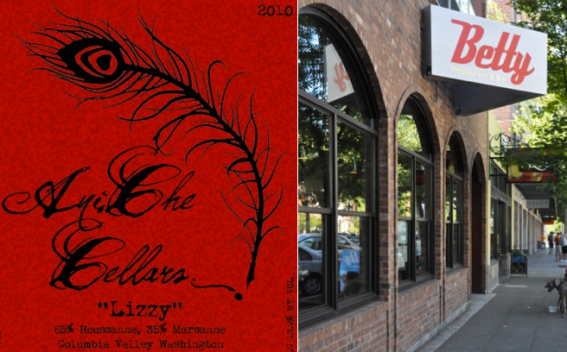 Why It Works: Roussanne is robust, rich and ripe in fruit tones and (in cooler climates) vivid with  acidity. Marsanne is nutty, spicy and brings non-fruit tones to the blend, as well as an old-world oily, honey texture with some age. Together, they balance out to a model wine for food that is also unctuous, full-bodied and perky with acid, the textbook match for chicken.

The Recommended Match: AniChe Cellars‘ 2010 Lizzy, Columbia Valley ($22) — Winemaker and owner Rachael Horn is proud to trumpet her failure as a writer. Although she chronicles her wine life on her winery’s blog, Horn said after several attempts at writing novels, she turned her affections for literature toward her other adoration, winemaking.

Naming her wines after her favorite fictional characters, such as her Syrah, “Attitcus” (To Kill A Mockingbird) and her Bordeaux-blend, “Goat Boy” (Where The Wild Things Are), my choice bottle was her “Lizzy” Roussanne-Marsanne, labeled for Elizabeth “Lizzy” Bennett/Darcy in Jane Austen’s Pride and Prejudice. Clever girl (The Silence of The Lambs reference).

The 2010 Lizzy is Roussanne heavy, with 65%, and blended with 35% Marsanne, its often times, and much needed, peer. Bright, yet lush and warm with fleshy stone fruit of peach, nectarine and pear, the honeysuckle, nutty spice and savory sweet tea push through the back of the nose and round out the wine with more than just a tease of what summer might bring.

The wine trifles with some residual sugar, but nothing the bouncy acidity of Columbia Valley (and the Gorge) fruit couldn’t balance out. The sturdy and buxom white has the right amount of sweetness and plump fruit to flirt with the fat of the crisp chicken skin and natural plushness of juicy chicken.