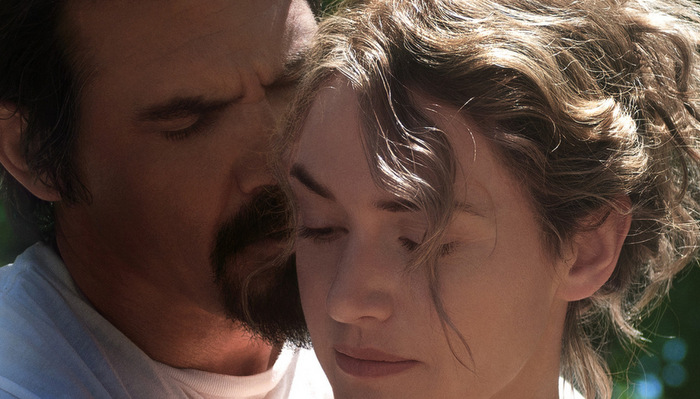 Jason Reitman’s Labor Day is a hokey, sentimental, botched abortion of a film, asking “Would you like some cheese with that ham?” Dreadfully sappy and spilling over with predictable narrative turns that’ll have you groaning in your seat, this gushing melodrama employs the trifecta of director Jason Reitman, Kate Winslet and Josh Brolin with all the elegance of buckshot into a watermelon.Both accomplished performers do give it their all and commit to the dungy script with full hearts, but they’re given such softcover romance novel material to work with that even their most devout earnestness can’t cover the gaping hole. Even the most talented of artists could turn this thin-skinned story that screams bubble bath bathos into a respectable and engaging tale.

Almost at points weaker than a Nicholas Sparks’ doomed romance, Labor Day sees an escaped convict (Brolin) hole up with a single mom (Winslet) and her son, played by a steady-handed Gattlin Griffith. Quicker than this beast can say Belle, Winslet’s Adele is fawning over this goatee-rocking con with none other than a gaping wound in his side. We’re led to believe that her illogical swooning comes from some form of “love at first sight” nonsense but the shoddy sham that’s truly going on is far more evident to the audience. She falls for him because he’s a man, willing to employ years of manliness to fix up the house and put her, near crumbling, affairs in order. Most importantly though, Frank’s the first dude to look her way in what seems like years and he’s apparently really digging her shaky, damaged goods routine.

As for Frank’s broken brand of bittersweet, he’s a man deeply distressed by certain events in his past, that oh so conspicuously percolate up over the course of the film, but he’s got an encyclopedic knowledge of just about everything and is as soft-skinned as the peaches that he makes into pies. From making irresistible pie crust to replacing furnace filters, he’s got more tricks up his sleeve than Mary Poppins. “How could this guy possibly be in jail for murder?” we’re meant to wonder, “He’s just so great!” Even though Brolin tries to sand down the edges of this over-the-top character with his rough and gruff persona, nothing he does is able to override the neon heartstring-yanking intent seeping from the page.

Strangely enough, in the throes of this hackneyed love drama Reitman tries to ratchet up some invisible tension with a syncopated score reminiscent of a 90’s spy thriller complete with edgy camera casts into the foreboding wooden atmosphere. Truly, there is never a moment of suspense, never a second where we don’t know exactly what is going to happen next so it rarely makes sense why he’s trying to weave tension from thin air. Worse yet, as he moves into the home stretch, the narrative makes drastic turns towards egregiously cornball resolutions we’d expect from a mega bargain paperback fiction. When Tobey Macguire‘s career turns to pie making, the writing has covered the wall.

An embarrassing stain on the respected filmography of all involved, Labor Day is really just not the kind of film one would expect Reitman to make. From Juno to Up in the Air, Thank You For Smoking to Young Adult, this is a man intent on exploring themes of loss and personal exploration, growing pains and manipulation. This sees none of the above and has the grace of a drunken tabby cat. A misfire in all senses of the word, let’s just write Labor Day one off as the dud that it is and hope it’s no more than a fluke in an otherwise commendable career.