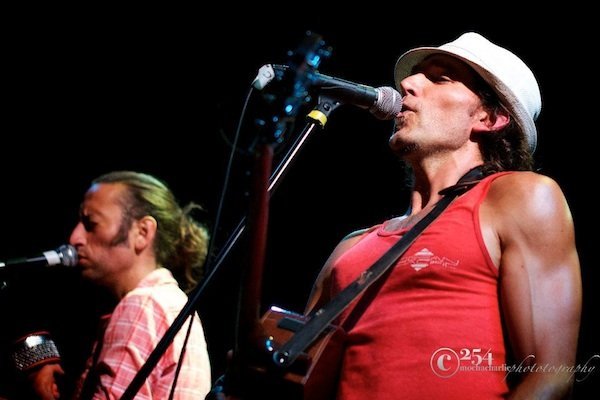 Courtesy Luc and the Lovingtons

Local musicans launch a unique tour to spread the love

Reading the news these days can be a real buzzkill; because of this, we cherish the rare feel-good stories even more. As an example, local group Luc and the Lovingtons are about to launch their revolutionary idea—a Goodness Tour designed to spread hope and positivity through music, rather than to simply gain profits for the musicians (who play the shows for free).

Though the complete tour schedule has yet to unfold, it launches here in Seattle today (September 11) with an 11 a.m. show at downtown’s Mary’s Place (a shelter for women and children), and this weekend the spirited musicians will take their talents to unlikely spaces like tent cities inhabited by homeless folks around town.

Though based in the Pacific Northwest, this “world-soul-reggae” band boasts South American roots and has become well-known for its dynamic live shows and powerful messages. (Comparisons have been made to such artists such as Bob Marley, Stevie Wonder and India Arie.) Luc and the Lovingtons’ song “Freedom Song” appeared on Jason Mraz’s 2012 album Love is a Four Letter Word, and songwriter Luc Reynaud has been a featured TEDx “Genius Talks” speaker, presenting on the healing power of music.

We recently caught up with Reynaud about his do-gooder ways, spreading “happy hits” and an approaching tour of a lifetime.

Seattleite: Can you tell us a bit about the origin of your group and the evolution of the Goodness Tour?

Luc Reynaud: Luc and the Lovingtons started in 2007 on the inspiration of an experience I had had in a relief shelter where I saw how music saved people. I said to myself, “I want to create the most jubilant, uplifting, filled-to-the-brim-with-goodness, soul funky band possible.” I started it with a group of some of my closest friends and finest musicians, and it’s grown to encompass players from all over the globe.

Yes, this is the first Goodness Tour we have ever done, but we’ve wanted to do this kind of tour since the very beginning. The founding idea of the band for me was putting music and service together. In the last couple years, we started creating our own thematic tours, ‘Welcome to my house’ tour, ‘We’re on an adventure’ tour, where we would take a song theme and an energy and vibe off it for the entire tour. I love getting on an idea and riding it like a magic carpet, just taking it as wide and far as you can.

Last year my best friend and founding member of Luc and the Lovingtons Felipe Canete died of a heart attack, and I went into the basement and prayed for what the next direction of our music would be, and the Goodness Tour came up. After getting through all that pain, and now that we are about to do the tour, I am so excited. It’s the best place to put your focus. Just thinking about ways to bring goodness.

S: How much of the tour is already planned, and how exactly will the shows work? How do you come up with venues at which to play?

LR: The tour is still being created as we speak, but right now we have a bunch of amazing shows lined up, some in tent cities for the homeless, juvenile detention centers, shelters for homeless women and families, shows for the elderly, etc. etc. It’s so completely different than any tour we have booked because we are not asking venues to let us in their doors; we are calling up social workers and saying, “Can we play for your people for free?” And most of the time, the answer is: “That would be great!”

S: What sparked your desire to give back through your musical talents?

LR: I feel so lucky, I feel like I’ve been given so much—great parents, great childhood, great family. Music is the best way I’ve found to share my heart with the world. I want to love the best I can and give the most I can.

S: How have you seen others positively affected by your music?

LR: It’s great when someone tells you an album of yours helped them through his or her year—or through a hard time. That’s the best, makes all the work worth it.  We wrote a song called “The Freedom Song,”and I was sent a video of a group of former child slaves in Ghana singing the song at the top of their lungs expressing their own newly-found freedom, and that made me cry…that moment was the best feedback of a song I think I will ever have.

S: How did “The Freedom Song” come about, and when did Jason Mraz become involved?

“The Freedom Song” was written with a group of kids and myself in a relief shelter after Hurricane Katrina. Part of it started with a poem written by a young boy Domeiko I worked with in Seattle; we put the music together down there in the shelter and recorded it with the kids there, too, right in that moment. I donated the song to an organization called Harmonic Humanity that was creating a compilation CD of original music for homeless to sell on the street. Jason found the song on that compilation CD and myspaced me asking if he could cover it. I said yes, and he took it all around the world and took us with him.

S: Your music has been described as a “jambalaya of genres.” What can people expect who have never heard you play before?

LR: If we are doing the full band live thing, it’s like Motown with the harmonies and the joy, the dancing and the class, reggae with the rawness and spiritual presentation, the positive vibe. It’s a celebration. Getting into the best feelings of the human family…The bubbly love thing…

S: What’s your main goal for the Goodness Tour?

LR: Ha, spreading goodness! But this first Goodness Tour, I would say the majority of it or three quarters of it is focused on outreach for those navigating homelessness. We are working with our loved organization Harmonic Humanity and traveling to places where folks without permanent homes congregate—and bringing music as an energetic service. After the jams, though, we plan to just listen, to spend a lot of time listening to people’s stories. It’s a totally acoustic tour, no big deals, amps, mics, just heart and soul music and conversations.

For the other quarter of the tour, we are partnering with an organization called Anonymous Good. Anonymous Good is an organization founded by Peggy Callahan, the same woman who, along with Jason, introduced our “Freedom Song” to those Ghanian children I saw in the video singing. Anonymous Good is based on a study in brain science that says when a person does a good deed or helps someone, they get a hit of serotonin, a hit of happiness…It also says that a person who hears or learns of a good deed also gets a happy hit. So they created a site where people could post their good deeds—anonymous or not—so others could learn of them, too, and everyone could get super flipping happy. The topper is that they gathered sponsors and philanthropists who are willing to match every good posted with a donation dollar amount going towards a good cause—like freeing slaves, feeding the hungry, creating clean water.

So when you post a good on their website, you feel good, make some else feel good, and you raise money for something good. You get to double or triple down on your good! We love the whole thing, so we created a challenge of 15 goods a week for us and all of our fans to join in with (everybody doing their own 15 and posting it in on our challenge page). Also, we put a message out for anyone in the path of our tour route to request possible moments of good we could create. So far, one woman has asked us to play for her 90-year-old mom whose health is ailing, and another person asked us to play for her friend who just overcame breast cancer; we are going to try to do them all.

It’s all swirling together and all of the dates and locations will be up on our website; just click on the Goodness Tour. Info will also be swimming around on our Facebook page. All ideas of goodness opportunities are welcome. Send them our way; all talents are welcome…bring your goodness to the goodness tour!