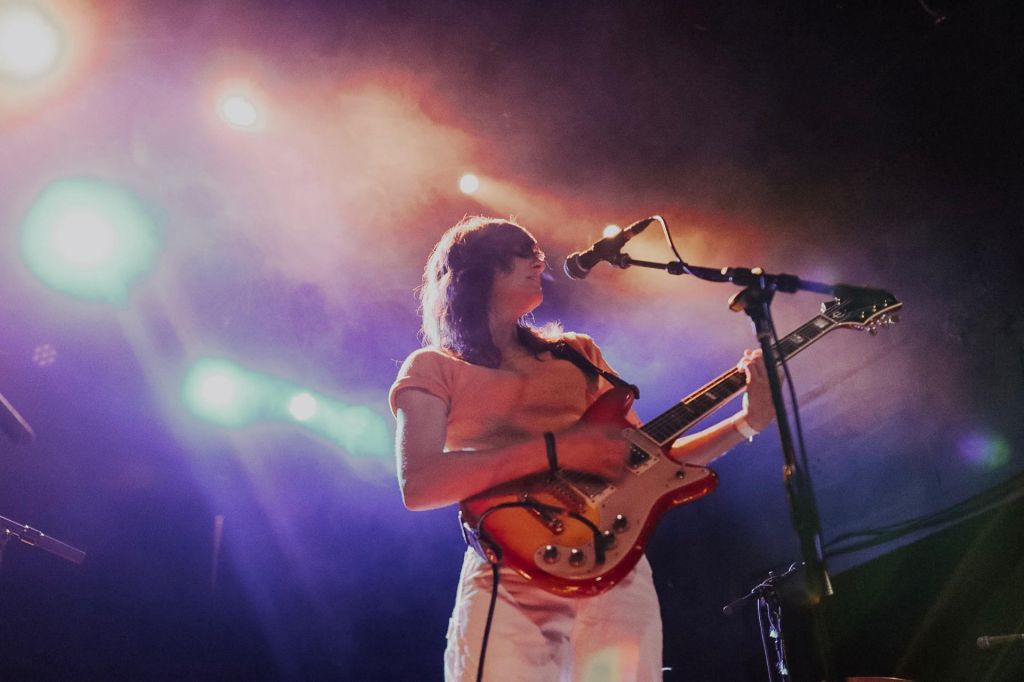 There’s nothing like a soulful concert to start the week off on a high note! Monday was without any blues as we hung out at Sunset Tavern where The Still Tide a.k.a Anna Morsett spun some amazing tracks.

Anna announced her new Between Skies EP alongside lead single “Change of Address”. It was a sold-out show and the energy was palpable as Anna played songs that had a retro nineties vibe to them. Anna is a powerhouse performer—she plays the guitar, is her own lyricist and sings too! Her music can best be described as indie pop, and is both stirring and relaxing, just like the name of the band implies.

Born and bought up in Olympia, Anna’s music has a distinct Pacific-Northwest touch to it. Anna talks about her Seattle connection, “I love Seattle and have so much deep-seated nostalgia and awe for the city and surrounding areas. Growing up and hearing all the music I did then that came out the way during the 90’s definitely left a mark on me. I have so many favorite places, really—but mostly anywhere near the water has my heart. As an audience, I think I’ve been lucky enough to be in and play for Seattle crowds that seem to be full of true music lovers. I’ve always seen them be really attentive, engaged and respectful.”

Seattleite: Could you tell me a little about your growing up days?

Anna Morsett: I grew up near the water in Olympia building forts and running through the woods, spending hours in imagined worlds. That freedom to explore and encouragement to create really shaped who I became, I think. My parents were also teachers and during their summers off we would all pile onto a small sailboat and take off north for a few lucky weeks in the islands near Canada. I think that too instilled a deep need and ache for adventure and travel that I’m still exploring.

Seattleite: How did The Still Tide come to be?

Anna Morsett: I’d been writing songs and playing music on my own since I was a teen but had always longed to play with a band. I’d always been hoping to explore what was possible for the songs I was writing with others. It wasn’t until I was living in Brooklyn in my twenties that I found friends to join me. It began slowly with the adding of another guitar, then a cello & violin before it eventually became the more traditional bass, drums, guitars band that it did.

Seattleite: At what age did you realize you have musical talent?

Anna Morsett: Ha, maybe 30?! Kidding, but I don’t know if it was a thing I realized so much as something others helped me see and encouraged in me. It had always been the thing I was most passionate about and hopeful for but I think it took actual years for me to see that the music I wanted to make and share was something others wanted to hear.

Seattleite: What was the turning point in your career?

Anna Morsett: Recording each of the records we have made felt like turning points. With each one, it felt like I was getting closer to the music I wanted to make, always somewhere close to what I’d been envisioning. Outside of that, I think the biggest marked turning point was moving to Denver and finding real footing in a community where we could grow and be nurtured as a band. Things fell into place so beautifully for us in Colorado it suddenly made things I’d been aiming so hard for – and for so long – suddenly seem possible. That felt huge.

Seattleite: What is the best part of a performance? Do you get nervous?

Anna Morsett: I rarely get truly nervous, but if I do it’s usually it’s if there’s someone I know in the crowd, perhaps someone who a song is roughly about. The best part of any performance is when I forget I’m performing altogether and really lose myself in the music. I feel at my best and most connected in those moments, like something true has been created between myself and the audience.

Seattleite: What can we expect from you in the near future?

Anna Morsett: We have a new album coming out this winter that we’re very excited about – lots of work and many talented hands helped it come to life and I can’t wait to share it.

Seattleite: What do you do to unwind?

Anna Morsett: Honestly, just by playing music, usually guitar – it settles me in the world and in myself.

Seattleite: If you were not a musician, what would you be?