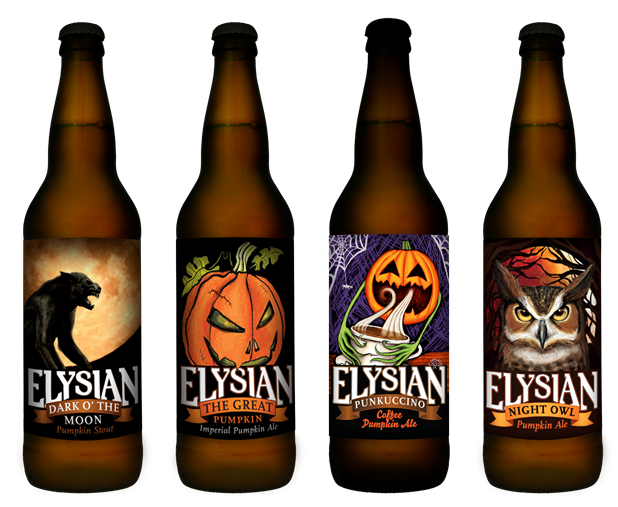 It feels like summer finally arrived last week and we’re already mid-August! While enjoying the last few weeks (or hopefully another month) of this blissful weather, pumpkin season is upon us. Seattle-born brewery Elysian Brewing Company, announces the release of Great Pumpkin Imperial Pumpkin Ale, Dark o’ the Moon Pumpkin Stout, and Punkuccino Coffee Pumpkin Ale. This trio of unique fall brews join Elysian’s first pumpkin release of the season, Night Owl Pumpkin Ale. Using only the best pumpkins in the Pacific Northwest, Elysian brews each beer with a unique recipe and blend of spices and ingredients.

Do you love fall beers? I see you, PNWer. You’re waiting out these treacherous 80 degree dog days of summer dreaming of your first delicious taste of spiced brew. Elysian Night Owl Pumpkin Ale will not let you down. When Elysian says pumpkin they do not play, with locally sourced pumpkins added directly into the mash. The flavor really shines through, with notes of cinnamon, ginger, and nutmeg acting as a great supporting cast.

The intense aromas will conjure up Thanksgiving dessert, while the beer is drinkable enough to enjoy more than one (if, say, you’re needing an extra punch to get you through your family time in the upcoming holiday season). Bonus tip: Some brilliant soul at my day job mixed this beer with a cider in our fall drink competition and won going away, if you feel like letting out your inner mixologist.

Great Pumpkin, Dark o’ the Moon, and Punkuccino, in addition to Night Owl, are available August through the end of October in select US markets in 22 oz. bottles and on draft.

Boasting intense aromas of pumpkin with sugar and spice on the nose, Great Pumpkin Imperial Pumpkin Ale is the world’s first Imperial pumpkin ale. Great Pumpkin is a smooth fall brew that pours a deep copper color with a ghostly white head. Brewed with Pale, Munich, Cara-Hell, Cara-Vienne, Cara-Munich and Crisp 45° L Crystal malts, the brewers add roasted pumpkin seeds and pumpkin in the mash, kettle and fermenter. Finally, the beer is spiced with cinnamon, nutmeg, cloves and allspice.

Perfectly blending together beer and a kick of caffeine, Punkuccino Coffee Pumpkin Ale packs a shot of Stumptown coffee into the pint with just a shake of cinnamon and nutmeg, and pumpkin added into the mash, kettle, and fermenter. Pale, brown, biscuit, C-77 crystal, chocolate and kiln-coffee malts provide the body, German Northern Brewer lends a touch of bitterness, and lactose sweetens the beer just a touch. The final result is a toasty, medium-bodied beer unlike any other pumpkin ale with all of the beloved flavors of the Pacific Northwest.

A slight smokiness on the nose with malty bittersweet chocolatey flavors, Dark o’ the Moon Pumpkin Stout pours dark as night with a creamy tan head. Brewed with Great Western pale, Crisp 77° Crystal, Munich, Cara-Vienne, roasted, chocolate and Special B malts with roasted pumpkin seeds in the mash and extra pumpkin added in the mash, kettle and fermenter. Finally, the beer is bittered with Magnum and finished with Saaz and crushed cinnamon, resulting in a spookily smooth fall beer.

Pumpkin lovers can also try Elysian’s lineup of fall brews at the 2nd annual Great Pumpkin Weigh-Off on October 1st and the 12th annual Great Pumpkin Beer Festival on October 8th. This year, the Great Pumpkin Beer Festival has expanded to Elysian Fields and the North Lot of CenturyLink Field for a one-day only event. GPBF will showcase over 80 unique pumpkin beers from brewers across the country, including 20 or so from Elysian’s pumpkin-crazed brewers and their collaborators.

Tickets can purchased at www.ElysianBrewing.com.