Chef Tommy McDonald, Seattle native and author of vegan cookbook Field Roast: 101 Artisan Vegan Meat Recipes to Cook, Share, and Savor shares 100 delicious, satisfying vegan recipes. McDonald is the head chef at Field Roast (founded in 1997 in Seattle), an artisan vegan grain meat and cheese company. We had the chance to chat with him last week for a Q+A about the cookbook, upcoming food trends in Seattle, and some of his favorite spots.

Seattleite: How did you get attracted the vegan and vegetarian space as a chef?

Tommy: My first exposure to real vegetarian cooking was in college at The Evergreen State College in Olympia. After a brief stint in Alaska, I moved back to Seattle and started working at PCC in the deli making tempeh tuna and kale salad. By the time I figured out the kitchen was where I wanted to be, I had already been exposed to seitan, tofu, soy milk, etc.

Years later, I started working at Field Roast because they were doing cutting edge, innovative, fresh, and exciting things. Field Roast took an approach to the space that was a complete 180 compared to what was out there in both flavor and texture.

David and the team at Field Roast talked a lot about the energy they put in to the food, and how much respect they had for the responsibility of making food and nourishing people. It felt like a right place right time scenario, and so far it has been.

S: Tell us about your cookbook, Field Roast: 101 Artisan Vegan Meat Recipes to Cook, Share, and Savor and what readers should expect.

T: The book has two parts to it, so it is kind of like two books in one. The first half shows you how to make plant based meat from scratch. Roasts, sausages, burgers, pate, they are all grain based and are modeled after the products that Field Roast sells in stores, but with some exciting twists, and new exciting flavors (smoked artichoke sausage anyone?). All the meats are grill-able, flavor-packed, and sure to impress your vegan friends and meat lovers.

The second half of the book is a melting pot of my favorite foods, all vegan-ized, and very reminiscent of our local melting pot of cultures. We do curry from scratch, grilled pizza, a killer bahn mi sandwich, and even delve into desserts. We wrote this book to help out all those folks who are enamored with food and flavor, but aren’t sure how to translate that to a fully plant-based approach.

S: What are some of your favorite recipes in the book?

T: The Khao Soi recipe is hands down my favorite. I am a total Andy Ricker fan boy and the first time I ever had this dish was at his restaurant in Portland. I had to figure out how to make it. The dish has so much dimension to it, from the crispy fried noodles on top, to the creamy coconut broth, and the fragrant curry, the flavors are a million miles away, but somehow so familiar.

I also love the Glazed Squash Collar recipe, which is a shout out to Maneki, one of my favorite restaurants in Seattle. They make a broiled black cod collar that everyone swoons over, so I put my own twist on it and make “ribs” from a red kuri squash we glaze, broil, and serve with rice. It is so simple, and the star is the squash, but it’s good beer (or sake) drinking food! 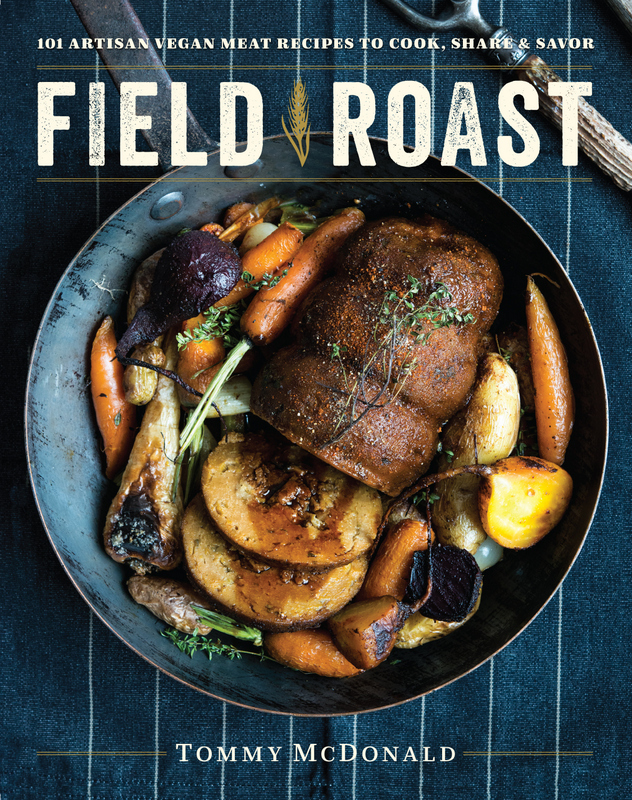 S: What do you tell meat eaters who are interested in learning more about Field Roast’s vegan grain meat?

T: I hope you are hungry. The best way to learn about Field Roast is to eat it. All the flavors are familiar. You can grill it just like any other sausage or burger, and it’s meaty and satisfying. This is vegan meat for meat eaters.

Also, get the book! It’s beautiful, you can leave it on your coffee table, and everyone will think you are hip and give a damn about what you eat. That is the most important part—giving a damn about your health and your planet.

S: Are there any new food trends to watch for in Seattle this year?

T: People have a new love affair with plants, so get ready to see all your favorite chefs figure out how to shift the center of the plate to the garden. Local produce is so excellent, and if you ever need a good reminder, just take a trip down to Socio’s in the market and ask them what’s good.

I’m loving hummus. Aviv Hummus Bar on Capitol Hill is awesome and has brought the Israeli hummus bar scene to Seattle and some of the best falafel I’ve ever had. I also love pastry and bread, so I’m pretty jazzed about all the awesome doughnuts, cakes, and rustic bread that is starting to populate storefronts throughout the city. Gluten is back!

I hope Seattle can support some more Afro-inspired cuisine, because I love Ethiopian food, the Senegalese restaurant in Columbia City is awesome, and Pam’s Kitchen is the only Trinidadian spot in the city, so we need more!

S: I read that you “strongly encourage people to make every meal a special occasion.” I love that! Do you have any tips on how to do that?

T: Sit down, take a second, stop looking at your stupid phone, and appreciate everything that went in to bringing that food to your plate. Meals are also a great time to connect with people, to nourish your body with fuel, and nourish your mind with a conversation.

S: What are some of your favorite restaurants in Seattle?

T: Boat Street Cafe is a dream and completely under appreciated. They make food that is so good and so simple, it will make you miss France with every bone in your body. Windy City Pie is bad for my waistline, but I just can’t stop. Tsukushinbo is the best sushi place in Seattle, and Sho is a master at his craft. Dahlia Lounge is the restaurant that made me want to be a chef when I ate there as a teenager, and even with all the new restaurants, and after all these years, they still hold it down with excellent service and the best pie you’ve ever had.