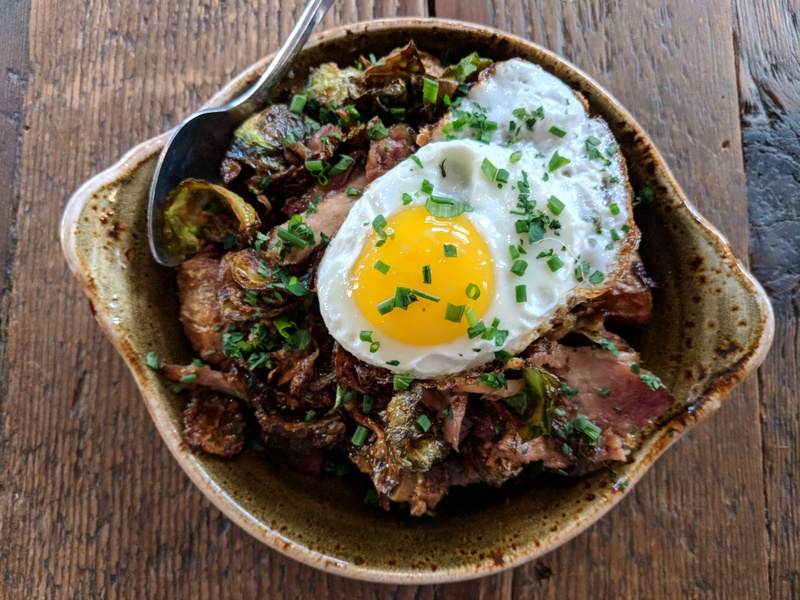 I’ll admit, I tend to stay away from restaurants situated on the ground floor of one of the luxury apartments slowly taking over the city, especially if that restaurant is in South Lake Union. But after stepping into Dexter Brewhouse, it was clear that the space was created intentionally to provide a warm, cozy spot in an ever-changing neighborhood.

The brew pub restaurant serves pub food made in-house along with 16 fresh and unique beers from Mollusk Brewing. Executive Chef Jon Langley offers a fresh and local take on brew pub food, with many of the ingredients sourced locally, just like the hops for the beer.

Everything we ordered on the weekend brunch menu was delicious. The flavors were bold without being over-the-top, the ingredients were fresh and it was clear that they were sourced with intention, and the meat was cooked so perfectly, it melted in my mouth.

We washed down our meal with a few beers from Mollusk Brewing, which is situated inside Dexter Brewhouse. The food is made to pair with their creatively craft beer, making it fun to try some different flavors. We sampled Cumulus (a hazy IPA), Rustic Red (a sour-ale), It’s Pretty Awesome (an American IPA), and Partytime!!! (a sour-ale).

After our meal, we got a tour of the brewery from Head Brewmaster Cody Morris. It was fascinating to learn more about the science behind the beer. Mollusk Brewing is producing vast styles of beer, while also offering delicious familiar beers (like an IPA). I definitely recommend checking them out if you love a sour ale. You can find their beers at Dexter Brewhouse, as well as markets throughout the city including Chuck’s Hop Shop, Whole Foods, and Metropolitan Market.

Dexter Brewhouse is located at 803 Dexter Avenue N. and open from 10:00 am – midnight daily.